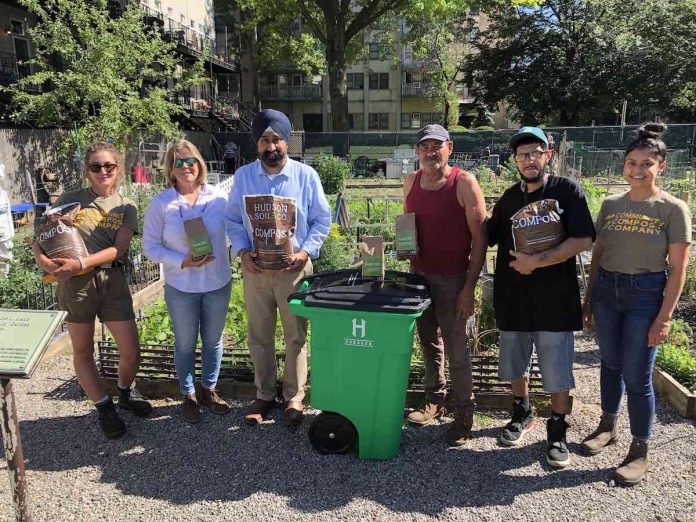 Mayor Ravi S. Bhalla, Community Compost Company and the Hoboken Green Team are pleased to announce that twelve public locations are now available for composting drop-off in Hoboken. Eight new locations opened today, tripling the size of the program and creating greater accessibility for all Hoboken residents. The composting expansion is a component of Hoboken’s Climate Action Plan to reduce greenhouse gas emissions and become carbon neutral by 2050.

The 12 drop-off composting locations now include:

“Hoboken will continue to be a leader in environmental sustainability, and we’re proud to partner with Community Compost Company to substantially expand our drop-off composting program,” said Mayor Bhalla. “Composting a simple but effective way to help Hoboken achieve the goals of our Climate Action Plan, and I encourage residents to consider these new drop-off locations and sign-up for the program!”

“We are honored to be partnering with the City of Hoboken to grow accessibility to food waste recycling. We believe composting should be available to all and the resulting compost returned to local gardens and green spaces to restore soil and grow food,” said Eileen Banyra, founder of the Community Compost Company.

Residents of Hoboken can utilize the drop spot by registering at hobokennj.gov/compost and taking a quiz to ensure compliance with the composting guidelines. The combination for the locked bins will be available once the quiz is completed. Participants have the opportunity to reduce their household trash by over 50% through composting. The practice also allows you to save money on groceries by limiting wasted food from overbuying.

The drop-off composting program has achieved the following, to reduce Hoboken’s carbon footprint:

The City of Hoboken and Community Compost Company have partnered on composting programs since 2015 to turn food waste destined for the landfill into compost for restoring soils. In partnership with the City, Community Compost Company also provides door-to-door residential and commercial food scrap collection services. The food scraps collected are transported to CCC’s farm in the Hudson Valley where they are recycled into compost and sold through the brand Hudson Soil Company in bags and bulk. Hudson Soil Co. Compost is sold at garden centers and stores such as Whole Foods and in larger quantities to urban and rural farms, home gardeners and stormwater restoration projects.

To learn more about all Community Compost Company offerings, visit communitycompostco.com and hudsonsoil.com for compost products.