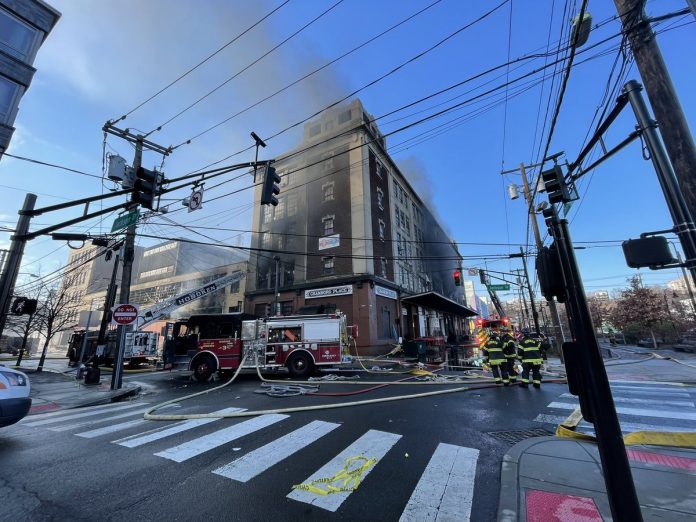 Meanwhile, the fire in the building restarted overnight and firefighters have been on the scene throughout today working to put it out.  Residents and motorists are advised to avoid the area…Observer Highway, Jackson Street and Newark Street so needed emergency personnel and vehicles have direct access.

The Hoboken Relief Fund, utilized last year to benefit those impacted by the COVID-19 pandemic, has been restarted to collect donations to be distributed to businesses displaced by the fire.   Members of the community are invited to provide a tax-deductible donation to the fund at https://hobokenrelieffund.com.

A statement released this afternoon from the Board of the Hoboken Relief Fund reads:

“We’re heartbroken over the fire that has displaced so many local business owners in Southwest Hoboken. These businesses have been hit hard first by COVID-19, and now many with no home and no source of revenue right before the holiday season. We are glad to re-start the Hoboken Relief Fund, to collect money to benefit these affected business owners to help them at a time they need it the most. We encourage Hoboken residents who can afford to do so, to donate to this fund, a 501(c)(3) not-for-profit corporation, 100% of which will be provided to the affected businesses. Thank you to Mayor Bhalla and Councilman Ramos for reaching out about re-starting the fund and to all of the residents for their consideration of any funding amount.”

Due to the current situation, Hoboken Firefighters IAFF Local 1078 has announced that Santa’s trip around the city tonight with the Fire Department has again been postponed.  The Department says it hopes to due it tomorrow.