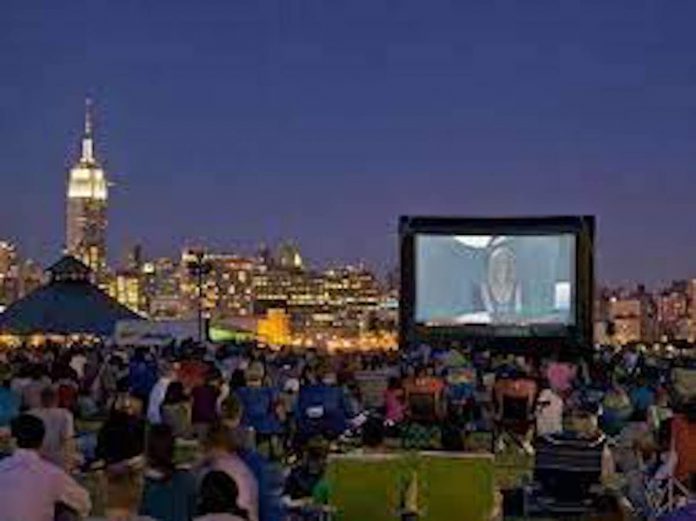 MAYOR BHALLA AND CITY OF HOBOKEN ANNOUNCE MOVIES UNDER THE STARS; CONCERTS IN THE PARK SCHEDULE

Mayor Ravi S. Bhalla and the Hoboken Cultural Affairs Department are pleased to share the final schedule of Movies Under the Stars and Concerts in the Park, returning this summer in Hoboken. The selection of movies was based off of input from residents in a survey released by the City. All movies and concerts are free of charge.

“I’m thrilled to invite residents to our popular Movies Under the Stars and Concerts in the Park,” said Mayor Bhalla. “After a difficult year, we are glad these community-favorite events are returning for our everyone to enjoy. Come on out and enjoy the fun in our parks this summer!”

Movies Under the Stars at Pier A Park (100 Sinatra Drive)

June 30 – Jumanji: The Next Level – 2019, PG, 2hr 15min; Starring Dwayne Johnson, Jack Black, Nick Jonas, Awkwafina, Danny Glover, Danny DeVito‍; The gang is back but the game has changed. As they return to rescue one of their own, the players will have to brave parts unknown from arid deserts to snowy mountains, to escape the world’s most dangerous game.

Aug. 11 – Frozen 2 – 2019, PG, 1hr 43min • Kristen Bell, Idina Menzel, Josh Gad. Alfred Molina; Anna, Elsa, Kristoff, Olaf and Sven leave Arendelle to travel to an ancient, autumn-bound forest of an enchanted land. They set out to find the origin of Elsa’s powers in order to save their kingdom.

Movies Under the Stars at 7th and Jackson

Most concerts start at 6:00 pm, unless otherwise noted

July 8 – Krystal – High energy classic rock.  Taking you back in time, doing the best of the greatest bands in Rock history!!!

July 15 – Hey Bulldog – One of the best Beatles’ cover bands around.

July 22 – Tom Petty Engagement – An ALEO Production. Each summer they bring together some of the area’s finest musicians to celebrate a national musical icon. This year they will celebrate the music of Tom Petty.

Aug. 5 – Julio Fernandez and Friends will present a great selection of music, from jazz and funk to classic rock. There will be a mixture of covers with one or two originals thrown in. As in past years, the band will include top area musicians with some surprises in store.

Aug. 19 – Hoboken Sings – Get ready to strut your stuff & show off your talent. Co-presentation with the Hoboken Historic Museum

July 12 – Melting Pot with George Naha – Melting Pot is a quartet with deep Hoboken roots. The band plays a great variety of music, from R&B to Jazz, Reggae, Blues, Rock & Roll, etc. Their groove is infectious, and their musical interplay is well honed after about 40 years of playing together.

July 19 – Lloyd United – Lloyd United is a Hoboken based ukulele rock band, that is part psychedelic, glam, prog and Celtic, with a distinct sound combining songwriting talent with a pub rocking attitude and artistic vision, resulting in a spectacular live experience.

August 2 – Zydeco Revelators – hot, Louisiana-style Cajun dance music. Zydeco Revelators bring the MARDI GRAS party to you, any time of year!  Groove to the spicy gumbo of Cajun accordion, electric guitar, and smokin’ rhythms. Dance all your blues away!

and Elevator Pitch from 7PM to 8PM

June 15 – Yosi Sing-A-Long –  “Yosi’s shows are whimsical, interactive and imaginative, featuring an enthusiasm that is both magical and infectious. Yosi has five award-winning CDs and his music can be heard nationally on Sirius/XM SatelliteRadio, and WXPN “- Kids Corner.

July 6 – Music with Corey – Corey has the rare knack of connecting with kids through music. He loves what he does and it shows.

July 13 – Rockness Music – During Rockness shows, the stage disappears and everyone is in the band. Children participate in sing-a-longs, with big movement, and dramatic play. The performances are exciting, entertaining, and educational!

July 20 – The Fuzzy Lemons – Get ready to jump, wiggle, and shake with The Fuzzy Lemons, the juiciest family-friendly rock band on the scene! With laugh-out-loud lyrics and memorable melodies, every song tells a story.

July 27 – Birds and Ballads – The joy of birds through music, creative activity and discovery with Mr. Train and Dave Lambert

Schedules are subject to change. In case of inclement weather, concerts and movies may be rescheduled or cancelled.

These programs are also made possible in part by funds from The New Jersey State Council on the Arts/Department of State, a partner agency of the National Endowment for the Arts, administered by the Hudson County Office of Cultural & Heritage Affairs, Thomas A. DeGise, County Executive and the Board of Chosen Freeholders.

OpEd: Sotomayor Einstein on Why Governor Murphy Has Not Instituted a State Vaccine Mandate

OpEd: Sotomayor Einstein on Why Governor Murphy Has Not Instituted a State Vaccine Mandate - Hudson TV

Vaccine is your choice, Abortion is not 🙄

James Nichols, age 51, of Bayonne, pleaded guilty to one count of second-degree leaving the scene of an accident resulting in the death of John Hagans which occurred on September 10, 2020, in Bayonne. Pursuant to the plea agreement, the State will recommend a sentence of five years in New Jersey State Prison and a consecutive two-year driver license suspension. #hudsoncounty #bayonnenj #FatalAccident ... See MoreSee Less