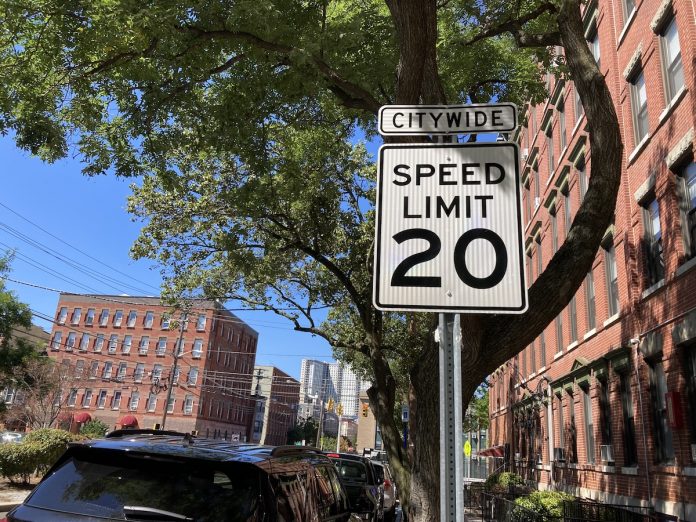 The City of Hoboken and Hudson County today began installing new signage and striping to reduce the citywide speed limit in Hoboken from 25 MPH to 20 MPH. The reduced speed limit aims to make streets safer for all modes of transportation in furtherance of the City’s Vision Zero goal to eliminate all traffic-related deaths and injuries by 2030. 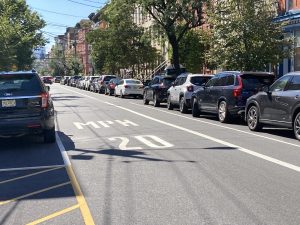 Combined with other safety improvements, such as curb extensions, high visibility crosswalks, corner daylighting, leading pedestrian intervals, and dedicated bicycle facilities, a reduced speed limit can help reduce the likelihood that crashes happen. When crashes do occur, research shows that even a small reduction in vehicle speeds can have a significant impact on decreasing the severity of crashes. Reducing the citywide speed limit is recommended in the City’s Vision Zero Action Plan and is part of the “safe systems approach” used to reduce traffic injuries and deaths on public streets.

“A citywide 20 MPH speed limit is the latest commitment we are making to ensure our streets are safer for residents and visitors of all ages and abilities,” said Mayor Bhalla. “While we continue to make great strides to implement safety improvements to our streets, this important change will provide even greater protection to children, seniors, and our most vulnerable residents. Thank you to the City Council and County for partnering with my administration on this initiative. Together, as a community, we can reach our Vision Zero goals of eliminating all traffic-related deaths and severe injuries over the next several years.”

“I am proud to have served on the Hoboken Vision Zero Task Force since it was founded over four years ago, and the 20 MPH speed limit implementation has been a top priority for me since its discussion as part of the Vision Zero Action Plan,” said Council Vice President and member of the Vision Zero Task Force Emily Jabbour.”We know that the chances of serious injury increase exponentially as the speed of a vehicle increases; this policy change is a commonsense approach to improve pedestrian safety for our City, and I’m thankful that Hudson County and Hoboken’s Transportation Department were able to work together to make possible.”

The implementation of a 20 MPH speed limit, as authorized by the Hoboken City Council and signed into law by Mayor Bhalla in July, will include new signage and educational initiatives to help inform drivers and improve compliance rates through a partnership with the Hoboken Police Department and Hudson County Sheriff’s Department.

“The education campaign and our new stationary speed signs on the eight entry points to the City, will go a long way in calming the traffic and protecting pedestrian, driver, and cyclist lives,” said Public Safety Director Kenneth Ferrante. “An enforcement campaign will then be introduced on the north and south ends of our city , where the Hoboken Police Department and Hudson County Sheriff’s Depart will collaborate to ensure that drivers are operating at safe speeds.”

Since Mayor Bhalla established the City’s Vision Zero initiative and launched the Vision Zero Task Force by executive order in 2019, Hoboken city streets have not had a traffic-related fatality.

For more information on the City’s Vision Zero initiative, go to www.vzhoboken.com.