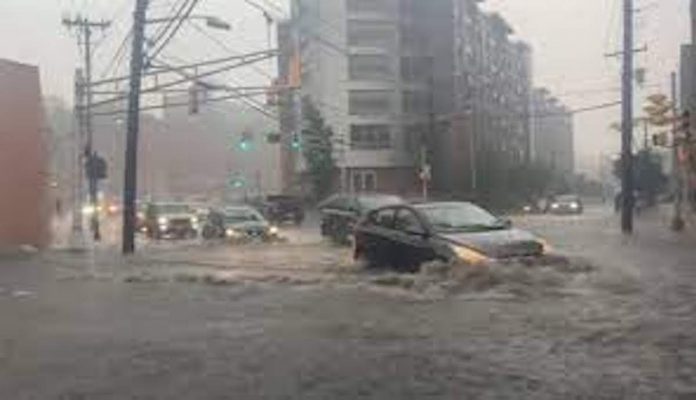 Recap of Storms Between 7/8/21 and 7/9/21
The City of Hoboken dealt with three distinct storm events over the past 24 hours.  The first occurred at around 2pm on Thursday, the second began around 5:30pm on Thursday, and the third was Tropical Storm Elsa which reached Hoboken around 1am on Friday.  In total, Hoboken received 3.74 inches of rain in less than 24 hours, with the most intense rain falling around 5:30pm on Thursday.  The intensity of the rain on Thursday night was measured as the fifth most intense rain storm event since 2016 with peak intensity reaching 2.92 inches/hr.

Both H1 and H5 pumps were operational, each capable of pumping up to 50 million gallons per day, as were both City resiliency parks, together storing nearly 700,000 gallons of water.  The pumps and tanks cannot solve all flooding issues in Hoboken, especially when rain events are as intense as what Hoboken experienced this week, but they do help to reduce the amount of water that ponds in the streets AND remove that water from the streets faster than in previous years.

Flooding did occur in a few areas of the City, mostly in Southwest Hoboken, from 3rd to 5th Streets on Jackson Street, and from 8-9th Streets on Madison Street.  By 10am almost all of the flooding had receded and City crews began cleaning highly impacted areas.

There were no reports of downed wires, fallen trees, or power outages in town but PSE&G had crews in service in case of emergency.  In addition, Hoboken OEM, Fire, and Police had extra staff on duty to ensure public safety and traffic movement throughout town.

Storms are becoming more frequent and more intense due to climate change
The reality is, according to numerous scientific studies, these types of storms are already becoming much more frequent and with greater intensity, due to rising global temperatures and climate change, and will continue on this pattern. In fact, one study determined the heaviest 1% of rain events in the Northeast region of the United States have increased by 42% since the 1950s. Needless to say, here in Hoboken, we’re experiencing first-hand the fact that intense rainfall events are occurring more frequently than they were decades ago. This is not to shift the blame, it is simply to give context and a holistic view of what is occurring in Hoboken (learn more about what Hoboken is doing to combat climate change).

Nonetheless, Hoboken is making major investments into mitigating the large majority of storms and heavy rain events that are more frequent
What we can do, and what we have been doing, thanks in large part to our strong partnership with the leadership and commissioners at NHSA, is to continue with investing in smart, sensible flood infrastructure that will help alleviate the majority of flooding events. As we’ve communicated about previously, under construction right now is another resiliency park in Northwest Hoboken, that will have the ability to store up to 2 million gallons of rainwater when complete, and further mitigate flooding in Northwest Hoboken. And, our $230 million Rebuild by Design project is one of the most innovative projects in the entire state to eventually protect from storm surge from the Hudson River through above ground amenities, including a public park. We’re continuing to build rain gardens, cisterns, and integrate flood infrastructure into a number of our City projects as a matter of policy. In the past few years, both of our parks in Southwest Hoboken and at 7th and Jackson have come online that include green infrastructure and underground detention systems to withhold more than 670,000 of gallons of rainwater.
Learn more about Hoboken’s efforts to mitigate rainfall flooding, and how Hoboken and NHSA prepare for, respond to, and recover from intense rainfall storms.