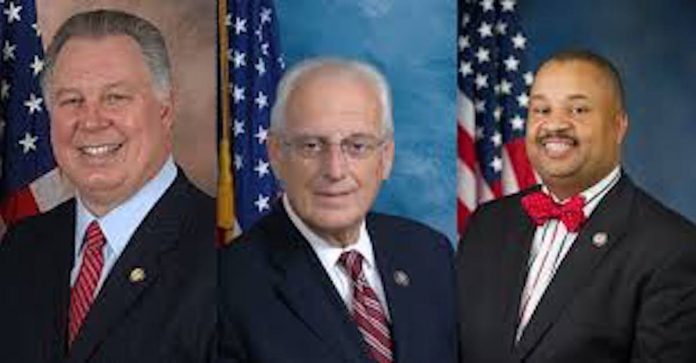 When the state of Georgia certifies the victories of both Democratic Senators-Elect, Jon Ossoff and Raphael Warnock, Vice President-Elect Kamala Harris becomes the tie breaking, 50-50 vote.

With media outlets having already leaked the “behind the scene chatter” that Senator McConnell welcomed the President’s impeachment as a way of striping any future GOP power he might hope to retain, the Kentucky Senator is not going to reconvene the Senate early in order for a trial against the President to begin in a swift manner.

In all likelihood, the Senate will return to work, on schedule, on January 19, the earliest date a Trump trial would start.  As of this writing, McConnell has not stated whether he will vote to convict Trump.

So what are the thoughts of Hudson County’s three, Democratic Congressmen to Wednesday’s, House impeachment of the President?  All three voted for impeachment.  Congressman Donald Payne (D-District 10) stated, “This president will go down in history as the worst one America has ever had.  Since his election, he has shown a reckless disregard for the safety and security of the American people through his coronavirus response and his support for an insurrection against our country.  President Trump’s urging of rioters and domestic terrorists to  siege our Capitol Building, a symbol of democracy worldwide, shows he must be removed from office immediately.  Once he is removed, we can work to restore America as one nation again with liberty and justice for all.”

Congressman Albio Sires (D – District 8) stated, “This afternoon, I voted in favor of impeaching President Donald Trump for inciting insurrection against the Government of the United States. The words and subsequent actions of the President over the past week have indicated that he refuses to take responsibility for his role in the attack on our nation’s Capitol and the Legislative Branch. He has severely undermined our country’s standing around the world and abdicated his authority to lead the United States. The bipartisan effort to impeach the President is not the result of seeking further discord, but of holding accountable a man who has actively worked against the interests of American democracy by sowing doubts about the legitimate outcome of an election he lost, and inciting a riotous mob to storm the Capitol and prevent Congress from formally confirming the 2020 election outcome.”

The Congressman from West New York went on to say, “Some of my Republican colleagues have called for unity by letting the President get away with his crimes. I want our country to unify as well, and the best way to ensure that outcome is for those who sought to bring down our democratic institutions to answer for their crimes. My vote to impeach the President for a second time is not one taken with joy, but with a solemn obligation to preserve, protect, and defend the Constitution; that is what my colleagues and I did today.”

Congressman Bill Pascrell (D – District 9), who voted for impeachment, wrote an op-ed piece for the Bergen Record concerning the impeachment of President Trump back on December 27, 2019.  That piece may be read here: