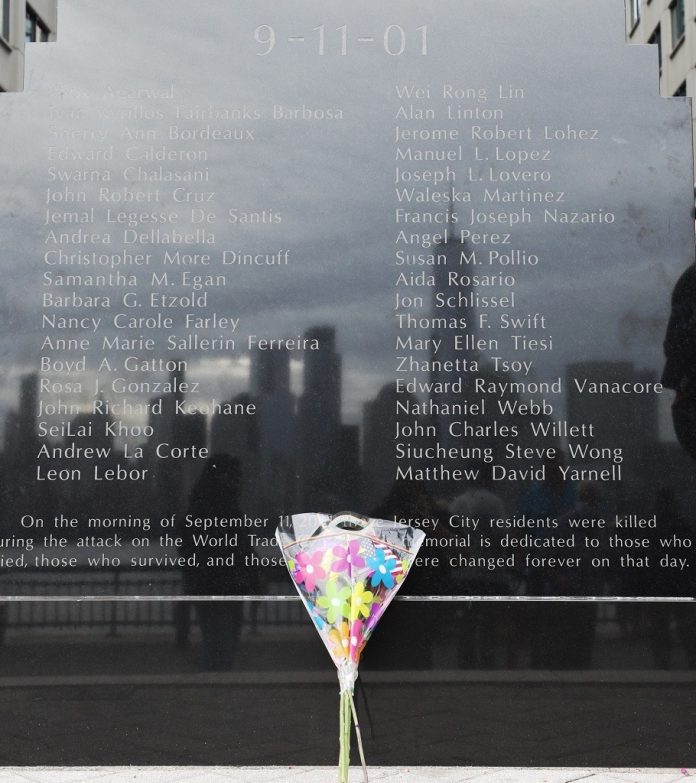 “Jersey City had one of the larger amounts of fatalities outside of New York, so it’s always a day of significance here,” said Mayor Fulop, who decided to enlist in the Marine Corps because of the terror attacks.  “There are many reasons why this event is so important – to memorialize the many lives lost 21 years ago and to educate the broader public, especially our younger generation who may not have been born yet.”

“Last year was a milestone year, but every year it is just as important that we come together to commemorate the lives lost on that horrific day where Jersey City became a respite for many.  Attending this event allows me to give my support to those who lost loved ones and to keep their memories alive no matter how much time has passed,” said NJ Assemblywoman Angela McKnight.

The annual remembrance ceremony in Jersey City took place with a backdrop of the Manhattan skyline.  All 39 names of the Jersey City residents who were killed on September 11th were read by Assemblywoman McKnight and the Jersey City Municipal Council members.  The entire event was live-streamed for those who couldn’t attend in person.

The annual waterfront ceremony where Jersey City’s 9-11 memorial is located was used as the area’s largest triage center on the day of the attacks in 2001. At the site, Jersey City emergency responders did not hesitate to provide assistance and medical treatment to the countless people who flocked to Jersey City by boat to seek refuge.

The Jersey City 9-11 memorial is comprised of twisted steel beams from Ground Zero. The beams are sculpted to form the letter “A” when viewed from above. The ‘A’ for America serves as a backdrop to the black granite memorial stone that names the 38 fallen residents from Jersey City.

“Having these events and acknowledgments every year keeps their memories alive.  It’s important for me to make sure I attend every year because my friend, Barbara Etzold, didn’t get an opportunity to move on with her life,” concluded Jersey City resident Barbara Smith.  “The fact that it’s now 21 years and how quickly it’s gone by.  It really is the least I can do.”