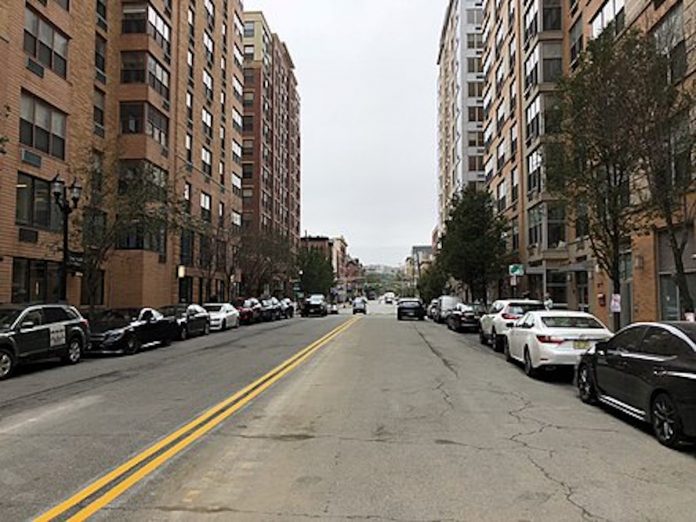 38-year old, Jersey City resident Nelson Ricaurte, by arrested by Hoboken Police at 11:17 p.m. on Sunday at 2 14th Street, near Sinatra Drive North.  According to Detective/Lieutenant Danilo Cabrera, Commander of the Investigation Bureau, Ricaurte is charged with possession of phencyclidine (CDC), possession of drug paraphernalia, and various motor vehicle offenses, including driving under the influence, reckless driving and driving while suspended.

At 10:47 Sunday night, police responded to a call that a vehicle crashed onto the sidewalk near 14th Street and Sinatra Drive North.  It was also reported that the vehicle’s occupants walked away from the crash.

Rutkowski believed the male, who turned out to be Ricaurte,  was the vehicle’s driver.  He also determined he was intoxicated and unfit to operate a motor vehicle.  A search of the vehicle by one of the other officers who responded to the scene found a small, glass vial filled with a brown liquid.  The liquid turned out to be a controlled dangerous substance.

Ricaurte was arrested and taken to the Hudson County Correctional Facility in Kearny.

No COVID-19 Deaths at NJ Hospitals in a 24-Hour Period, Other Numbers Troubling

Hoboken braces for impact of Isaias. Puts no driving restriction in place beginning 8 am on Tuesday. ... See MoreSee Less

The City of Hoboken has issued the following advisory in preparation for the impact of Tropical Storm / Hurricane Isaias, which is expected to hit the New York metropolitan region in the next 24 to 30 hours. Hoboken officials warn residents to be prepared for the storm’s impact. They have also put...
View on Facebook
·Share

The Fairview Police Department has issued a construction advisory for Bergen Boulevard. Beginning on or about Wednesday, August 5, PSE&G will be performing work on the gas main along Bergen Boulevard necessitating new traffic patterns be put in place. This will impact both northbound and southbound....
View on Facebook
·Share

Probably tripple the size,when was the last upgrade and who knows when the next time is.

Looking good with the new side walks. I also want to point out...can it possible to stop bicycle riders use the sidewalks...one minute I am walking slowly with my grandma then I have to move out of the way to let a bicyclist to go through.

Its a pleasure for me to write this testimony about how i got my Genital Herpes cured a month ago. i have been reading so many comments of some people who were cured from various diseases by Dr Omozojie , but i never believed them. I was hurt and depressed so I was too curious and wanted to try Dr. Omozojie , then i contacted him through his email when i contact him, he assured me 100% that he will heal me, i pleaded with him to help me out. My treatment was a great success, he healed me just as he promised. he sent me his medication and ask me to go for check up after one weeks of taking the medication. i agreed with him i took this medication and went for check up , to my greatest surprise my result was negative after the treatment, i am really happy that i am cured and healthy again. I have waited for 3weeks to be very sure i was completely healed before writing this testimony. I did another blood test one week ago and it was still Herpes negative. so i guess its time i recommend anyone going through Herpes HSV-1 or HSV-2, HIV, HPV, Hepatitis B, Diabetes, fatty liver and pregnancy problem, reaches him through Email (dromozojieherbalcure@gmail. com OR add on whatsapp +2349055726162 thank you sir, you can also connect him on feacbook facebook.com/dromozojieherbalhome/

What will Americans see in the next stimulus package currently being debated on Capitol Hill to overcome the COVID-19 pandemic? There are certainly different scenarios being talked about by Democrats and Republicans, but it is almost certain that whatever the final outcome is going to be, a stimulus...
View on Facebook
·Share

The Republicans have put money in the stimulus package for a new FBI bldg., renovation of the west wing, military spending & new fighter planes.

The first one went out quick due to corporations, but this one coming directly to the people so they give 2 f***s about it

Stop playing with peoples lives and pass the damm thing already!!! Shame on you” other countries are doing much better than the USA in taking care of its people and in fact paying out more in stimulus and even monthly as appose to what our government is doing!! We should all remember this come November and vote everyone in congress and all those politicians that played around playing chess ♟ with our lives while Americans suffered from this pandemic losing jobs , falling behind on bills , threatened to get evicted, and playing tug of war with the unemployment office over the phone for sometimes months trying to get approved just to find some means to try and keep our families afloat while YOU give us a one time stimulus and say HERE TAKE THESE CRUMBS AND SEE IF YOU CAN MAKE IT WITH THAT! then a couple of months later you debate should you approve another one or not and play the back & forth game with us?! This is sick cruel and inhumane :/

When did he get elected in thought it was still Roque