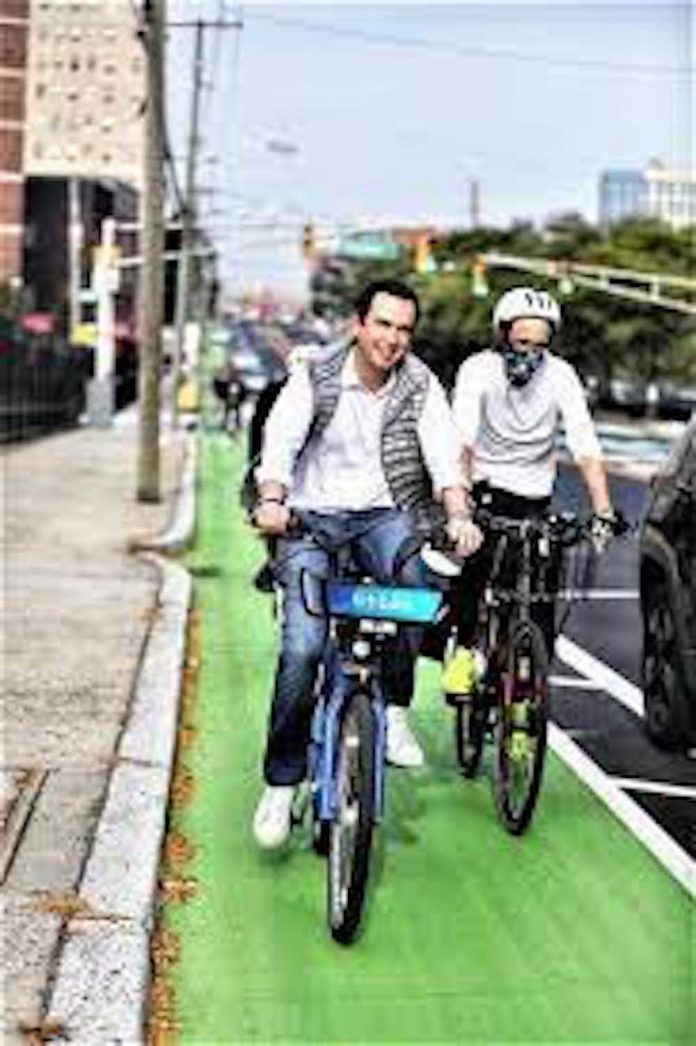 JERSEY CITY– Mayor Steven M. Fulop joined the New Jersey Bike and Walking Coalition (NJBWC) this week to accept the honor of the 2021 Marty Epstein Advocate of the Year Award. As the leader in bringing both policy, funding, and infrastructure to accomplish Jersey City’s aggressive road safety goals, Mayor Fulop was selected for this year’s award based on his work to make the City of Jersey City more accessible and equitable for biking and walking through a variety of studies, projects, and initiatives all based on community input.

Mayor Fulop is an avid cyclist and he has committed Jersey City to being a leader in New Jersey with regards to bike infrastructure and mobility overall.  Under Mayor Fulop, Jersey City established the first bike share program in the State. He was also the first mayor in New Jersey to commit to “Vision Zero” which is a goal of eliminating traffic-related fatalities by 2026.

“I’m incredibly honored for this recognition and I am thankful for NJBWC’s efforts to promote pedestrian safety,” said Mayor Fulop.  “In urban areas with dense population and limited street space, like Jersey City, bicycling and innovative mobility options are essential. That’s why we’re making the important investments to expand our transportation infrastructure and really open the door to countless opportunities for our residents by addressing the tough transit issues that traditionally affect urban areas most, such as closing transit gaps, affordability, access to jobs and education, and improving connectivity.”

The Advocate of the Year Award was presented to Mayor Fulop during the kickoff to this year’s 12th Annual New Jersey Bike and Walk Summit, being held virtually June 1 – June 5.

Mayor Fulop signed an Executive Order at the start of 2018 committing Jersey City to a “Vision Zero” goal of eliminating traffic-related fatalities by 2026.  Under the E.O., a task force established the first-ever Jersey CityBicycle Master Plan.  Adopted in 2019, the Master Plan sets ambitious goals to transform how residents move with the intent of quadrupling cycling levels in the city by 2025. This latest agreement builds on the administration’s clear commitment to eliminate barriers and increase access to biking within the greater area.

Mayor Fulop has invested aggressively in infrastructure by establishing a community-driven Bike Master Plan to which the City began implementing a comprehensive network of protected bike lanes. The City has created more than 10 miles of bikes lanes, with a goal of doubling the amount by the end of 2022.

“We are excited to recognize Mayor Fulop’s leadership in making the City of Jersey City a safer and more bikeable and walkable place to live. By incorporating a Vision Zero policy with a quick, phased roll-out of biking infrastructure across the City, Jersey City has provided a successful model for other municipalities in New Jersey looking to make their streets safer for all users,” said Debra Kagan Executive Director NJBWC.

Under Mayor Fulop, Jersey City established the first bike share program in NJ and integrated it into NYC’s CitiBike and partnered with Hoboken to create regional connectivity between cities. Mayor Fulop has expanded the program and used it as an incentive for City employees to increase biking by offering free membership to city employees and reduced rates to more vulnerable residents.

The Marty Epstein Advocate of the Year Award honors Marty’s 41 years of advocacy to make New Jersey a more livable place through bicycling and is given to individuals and organizations, in recognition of excellence in the bicycle and pedestrian advocacy movement.  The three other recipients spanning the State were also awarded for their efforts to greatly enhance cycling and walking throughout their respective communities, including NJBWCBoard Member Cyndi Steiner, Princeton Pedestrian & Bicycle Advisory Committee (PBAC), and Trenton Cycling Revolution (TCR).

“In less than two years, we’ve seen what building a bicycle infrastructure can accomplish – with 10 miles of protected bike lanes citywide reducing traffic while improving environmental and public health.  My goal is to continue to build upon our success and encourage other municipalities to incorporate similar initiatives, ultimately making New Jersey a safer, healthier, and more livable State,” concluded Mayor Fulop.