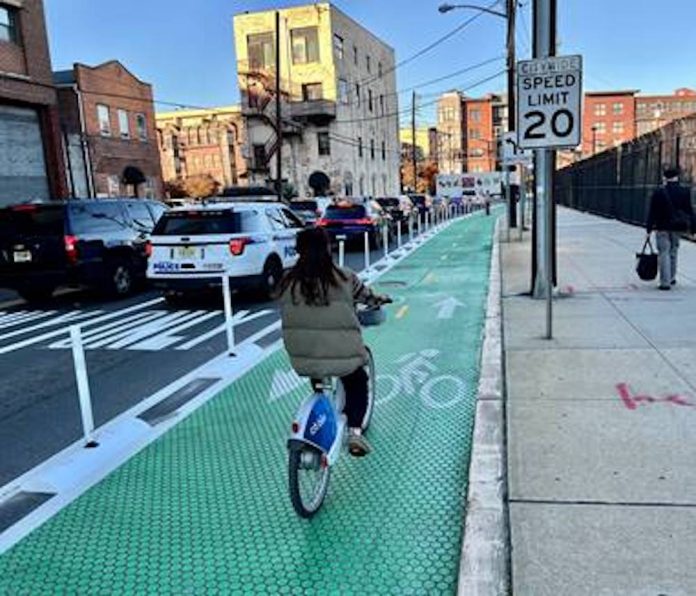 “Jersey City and Hoboken are among the most unique and busiest transportation hubs in the country, and this new bikeway linking our two cities is the latest step in expanding Jersey City’s growing network of protected bikeways to provide greater connectivity and safety for our residents and beyond,” said Mayor Fulop.  “We are proud to work with Hoboken, Commissioner Romano, and Hudson County Executive DeGise to find innovative approaches that provide countless new opportunities for the entire community from education and employment to healthcare and economic stimulus.”

“Hoboken is committed to creating safer streets for all modes of transportation, and this protected bikeway is the latest example of that,” said Mayor Bhalla. “We are proud to work hand-in-hand with Jersey City to better protect bicycle riders as they travel between our cities, and work toward our respective Vision Zero goals to eliminate traffic deaths and injuries. Thank you to Mayor Fulop, Hudson County Executive Tom DeGise, and Commissioner Anthony Romano for collaborating on this much needed connection.”

The new protected bikeway, created with a new high-visibility traffic separator curb, flexible bollards, and Endurablend surface to provide high visibility and traction, will yield a safe, and accessible option for bicycle riders who travel between Jersey City and Hoboken daily to reach major public transportation hubs, places of employment, as well as shopping and dining destinations.

The connection is the latest step both municipalities have taken to make it easier for residents to choose more environmentally friendly modes of transportation in furtherance of both cities’ climate action plans.  Last year, Jersey City and Hoboken partnered to launch a unified bike share system with Lyft’s Citi Bike to provide better connectivity between the two communities.

Since the partnership launched in 2021, users have taken over 180,329 rides between both cities, accounting for 13 percent of total ridership.

“Creating protected bike lanes is a proven way to keep people safe and to reduce traffic violence, especially for people who set out on foot, on transit, on Citi Bike––or all three. The Marin Boulevard redesign in Jersey City and Hoboken will make this stretch of road safer for cyclists of all ages and abilities,” said Laura Fox, General Manager of Citi Bike at Lyft

“We applaud Hoboken, Jersey City, and Hudson County for installing this much needed protected bike lane to connect our cities,” said Chris Adair of Bike Hoboken.  “This vital corridor is used by hundreds of people on bicycles every day and is now poised to see a huge increase in those numbers.

In addition to the protected bikeway, the project also incorporates improvements for pedestrians and drivers including the repainting of high-visibility crosswalks, as well as new extended turn lanes onto Newark Street and Observer Highway in Hoboken.  The extended turning lanes will increase queuing capacity along Marin Boulevard and Henderson Street when entering Hoboken, which is expected to provide a small improvement in traffic flow.

These Vision Zero improvements seek to remove the corridor from Hoboken’s and Jersey City’s High Crash Networks as identified in each respective city’s Vision Zero Action Plans. Jersey City and Hoboken are two of the only municipalities in New Jersey to have adopted Vision Zero initiatives.