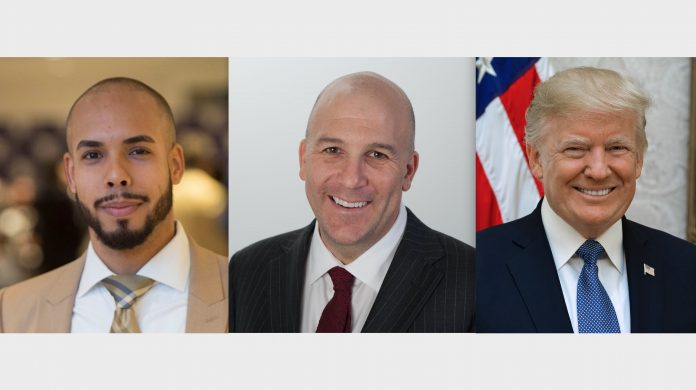 WEST NEW YORK, NJ — Hector Oseguera calls himself a progressive, but the truth is he’s a fraud. One of the former registered Republican’s biggest supporters and top donors is none other than major Trump supporter and real estate magnate Robert Verrone, who donated $1,000 to Oseguera’s campaign in January according to Federal Election Commission records. Verrone contributed $10,000 to Trump’s “Make America Great Again” PAC, and he’s a confidant of Trump’s son-in-law Jared Kushner. 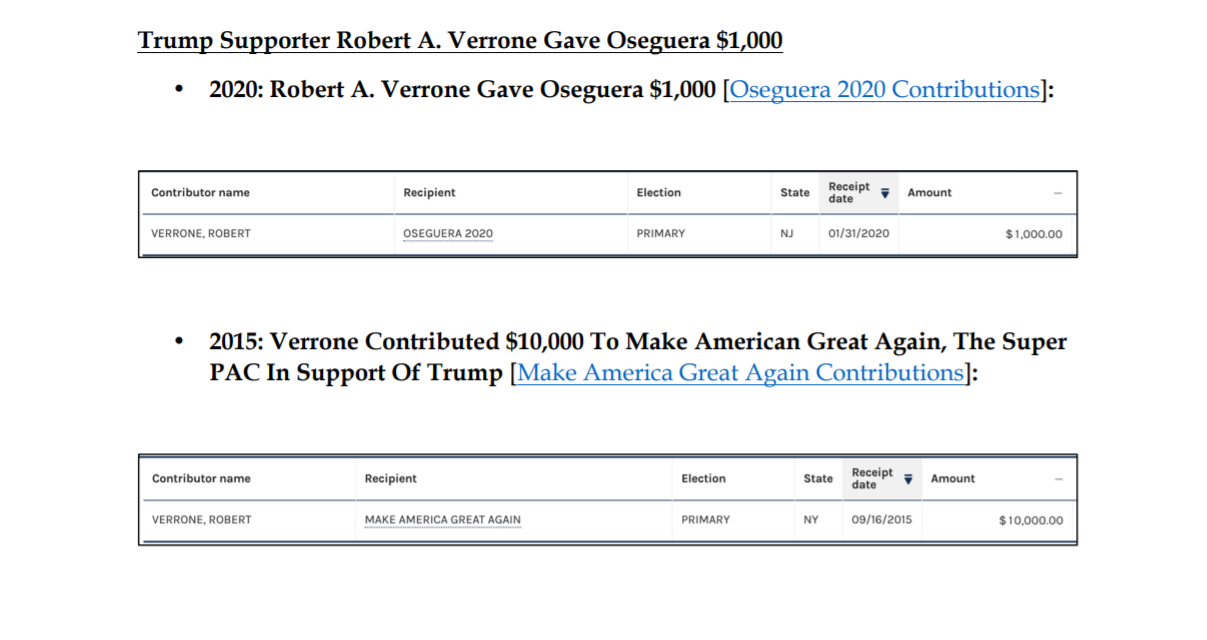 Oseguera’s official campaign website claims that “Developers have bribed local politicians” — but he’s taking money from a major developer himself! Verrone is the Principal of Iron Hound Management, a commercial real estate financing company that has handled billions of dollars in financial transactions related to commercial real estate development.

“Hector Oseguera calls himself a progressive, but he’s being funded by a major Trump donor and real estate magnate,” said Sires campaign spokesman J.P. Escobar. “The truth is that Oseguera is a fraud — he’s a fake progressive who in reality works as a corporate lawyer for Wall Street banks, used to be a registered Republican and takes money from Trump donors. The real progressive in this race is Albio Sires, who has the support of Governor Murphy, Senator Menendez and Senator Booker and major labor unions like the New Jersey Education Association, Communications Workers of America, Service Employees International Union, International Union of Operating Engineers and so many other advocates for working families who see the work Congressman Sires does every day.”

So, who won the first Presidential debate? ... See MoreSee Less

Wow. What did the American people just watch? That may have been the worst presidential debate in history. It was more shouting, talking over one another, and less substantial content on important issues than the viewing public could muster. I tried keeping count, but, alas, I couldn’t, but I thin...
View on Facebook
·Share

I don't want water as my insulin.

This is a joke smh

This man (President)is such a liar 🤥 insulin is much cheaper now, are you “F” kidding me!

A Jersey City police officer has admitted to conspiring to defraud Jersey City by obtaining compensation for off-duty work that she did not perform, U.S. Attorney Craig Carpenito announced on Tuesday. Sanchez is the twelfth officer in the Jersey City Department to plead guilty. Gicella Sanchez, 36,....
View on Facebook
·Share

She is a wonderful person. And by the way no one is perfect we all make mistakes..I pray and hope the best for her and her family..🙏🏻

Just another corrupt officer to add to the list.

She's the scapegoat, up to 70% of the police officers do the same shit. They're also in cahoots with technicians/repairman when they're assigned to street details involving Construction and/or gas and electric repairs, they purposely extend the duration of the work time in order to take advantage of the $70 to $80 par hour that they are paid with in taxpayer money for providing traffic control and a secure environment for construction workers and repairman. They see it as tradition and a way for the underdog civil servant to make ends meet, but in reality it's just plain thievery. It's worse than plain old thievery, it's the lowest kind of thievery because it involves a civil servant taking advantage of the tax-paying Public's Trust. They should all be audited, checks and balances all day long with a federal monitor in the same building with them. She is most definitely a sacrificial lamb, but at the same time this is probably her own Karma, I'm sure she's put plenty of people in handcuffs for engaging in criminal activities. The police think that the public hate them, the majority of the public does not hate the police, they hate the hypocrisy. Today's police officers need to learn how to stay on their side of the law, weed out the garbage and keep all the people of high moral standards, if it's not done immediately the entire American law enforcement Community will lose all integrity, and Civil Disobedience will reach biblical levels..

Hopefully she will get probation. The political government do more harm than what she has done

Was it worth it?

All cops are corrupts

Hudson County Freeholder Board applies for numerous grants for a variety of services. ... See MoreSee Less

The Hudson County Board of Freeholders have authorizes the application and acceptance of funds, if awarded from the New Jersey Department of Law and Public Safety, Juvenile Justice Commission, totaling $1,150,157. The 2021 Grant is administered through the County of Hudson and it is awarded to provi...
View on Facebook
·Share