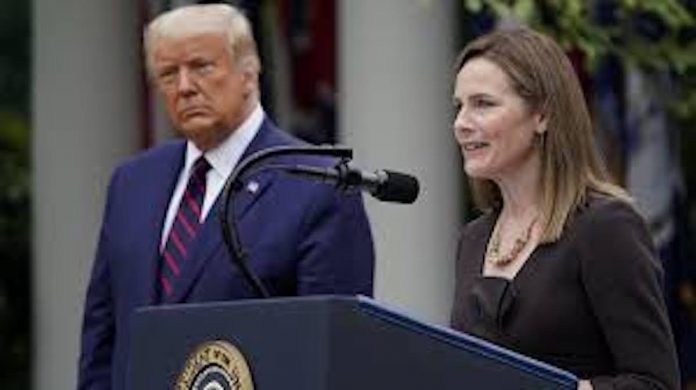 “This is nothing less than a cynical power grab in the midst of an election in which they fear that the will of the American people can ultimately end their reign. And this nominee is nothing more than a knowing pawn in their scheme.”

“The United States passed another grim milestone this week as the 200,000th American died from the coronavirus. Tonight, across the country, families sit at their dinner tables wondering how they’re going to pay next month’s bills with too many facing eviction and foreclosure. State and local government coffers are running dry, and small businesses are shutting their doors – many for good.

“And while President Trump and Mitch McConnell won’t lift a finger to pull our nation out of this unprecedented, deadly crisis, tonight, they’ve made clear they’ll be working overtime — to ram through a Supreme Court nominee and fulfill their dream of killing the ACA. To them, this nominee puts them within reach of tearing health care coverage and protections for pre-existing conditions from millions of Americans.

“This is nothing less than a cynical power grab in the midst of an election in which they fear that the will of the American people can ultimately end their reign.  And this nominee is nothing more than a knowing pawn in their scheme.

“There is too much at stake, not only for important issues like health care, reproductive rights, worker and immigrant rights, voting rights and climate change, but also for the legitimacy of the Supreme Court and the strength of our democracy.

“The American people deserve – and rightly expect — a voice in this process.  They must speak up with their voices and their votes.”

Senator Cory Booker was no less critical of the President, saying “Donald Trump’s nominee is a direct threat to the Affordable Care Act, reproductive choice, and so many other liberties we hold sacred.  We can’t be silent as he tries to rush a Supreme Court Justice through the Senate.  The American people deserve to have their voices heard.”

The U.S. Senate could confirm Coney Barrett to the Supreme Court just days before the election, as four hearings are set to begin on October 12 according to Senator Lindsey Graham (R-South Carolina), head of the Senate Judiciary Committee.  Graham says the four days of confirmation hearings should clear Judge Barrett by October 26, leaving the Republican-led Senate approximately one week to confirm the conservative Barrett’s nomination prior to the November 3 election.