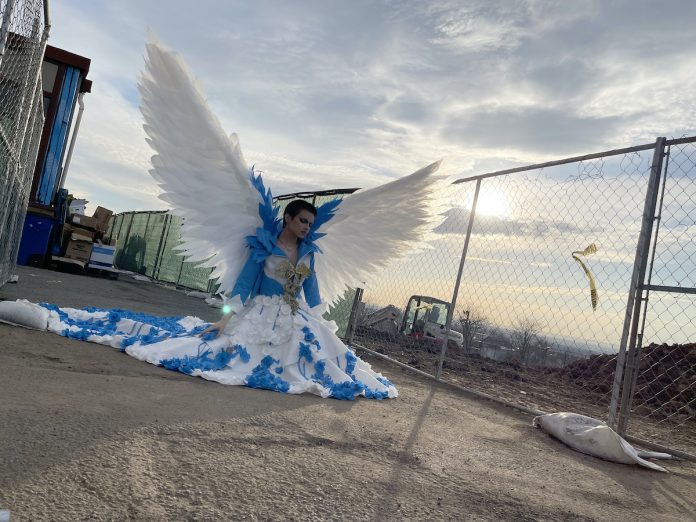 Several students from the high school’s art program and from the fashion and interior design program created the dress, which can be viewed in a window display case in the school’s entrance hallway. 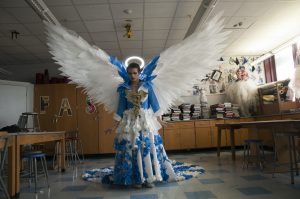 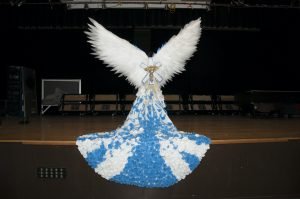 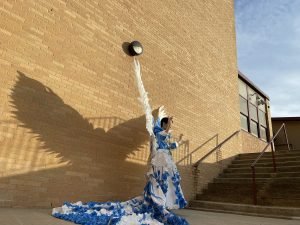 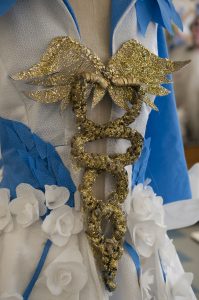 Art teacher Steven Defendini provides the following background: “This dress is ‘The Nightingale’ and was created to honor all the nurses, doctors and medical professionals who sacrificed so much these last two years.  While the last two years of this global pandemic had an effect on everyone, no one has been on the frontlines more than nurses. Through zoom screens and layers of personal protection, they became a part of our families when we couldn’t be there ourselves. They were there for our last moments and they were there for our first moments. This dress was crafted to be a visual representation of the hope and virtue that exemplifies the true spirit of nurses.
PROCESS:
When creating this dress, we knew right away that we were going to include two very specific things. One, we would include flowers. Flowers are a symbol of growth and that felt very appropriate for a field of caretakers who nurse us back to health. The second thing we knew we would include without debate was a set of wings because of how multilayered their message could be.

The first and most prominent material we used is something called Blue Wrap, which is a “99% polypropylene material.” A study conducted showed that Blue Wrap equates to 19% of the medical waste stream. It is the material that surgical devices are placed in once they are used.   We divided the workload in two parts. Mrs. Sapoff  and C.J. handled the assembly of the dress and the creation of the flowers. Mr. Defendini, Jazzlynn and Joselynn handled the wings. The volume of individual pieces meant there was a lot of cross collaboration between teams. We wanted to cover the dress in flowers as they are a sign of growth.  600 + individual flowers had to be made, each being made of 6 “flat” flowers that had to be folded and glued together. Given the volume of flowers and feathers, we feel like we were able to lessen the environmental footprint these materials would have had they ended up in a landfill.”

Good Morning America will be at North Bergen High School to feature the project on Wednesday, September 14. 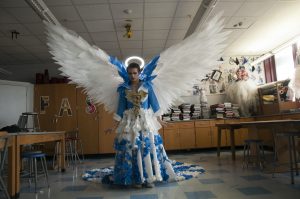