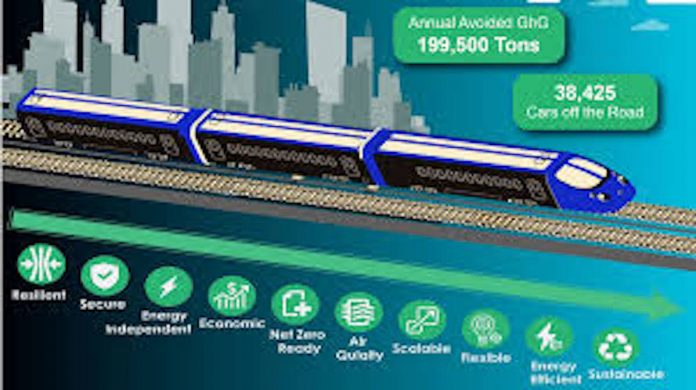 A year of protests by residents, municipalities, activists and environmentalists paid off last night at NJ Transit’s Board meeting, as the agency announced it is going back to square one, the drawing board, so to speak, on its natural gas-powered plant.  According the NJ Transit, the microgrid, known as TRANSITGRID, will go green.

The agency’s plan now is to replace the original idea for power generation with renewable technology, according to NJ Transit President and CEO Kevin Corbett, who stated, “We’re now in the process of reimagining this process to make it as environmentally friendly as possible.”

The proposed gas-fired, 140-megawatt power plant in Kearny was originally targeted to be built on 48 acres adjacent to the Hackensack River.  If constructed, it would have emitted 383,000 to 571,000 tons of carbon dioxide annually. The plan was designed to improve the reliability of electricity for the agency’s rail network.    TRANSITGRID’s power reach was designed to cover 64 miles of rail across parts of the Northeast Corridor and Morris & Essex lines and Hudson-Bergen Light Rail, but it averages 16 outages annually.

The plant was estimated to cost about $577 million, of which more than $409 million would have been covered by a federal grant.

Diane Gutierrez-Scacceteti, Chairwoman of the NJ Transit Board, told the public “we have heard you loud and clear.”  She emphasized the importance of NJ Transit being “highly visible and transparent” as the process moves forward.

The Board of Directors announced a commitment to hiring a renewables energy consultant to assist in the project’s multi-step design and feasibility process. The Board is approving up to $3 million in stipends to qualified bidders in order to foster the most creative, environmentally-sound bid proposals.

“The stipend program authorized by our Board today will encourage innovation and allow NJ TRANSIT to solicit the best possible technical design and construction solutions for our NJ TRANSITGRID project,” said Gutierrez-Scaccetti.

“NJ TRANSITGRID is a critical resiliency project that ensures we can maintain limited, but vital, rail service for our customers in the event of local and regional power interruptions,” said Corbett. “We will be incentivizing the national and international developer community to come up with the most innovative designs that will allow us to maximize the use of renewable energy for this project. Our commitment is to deliver a project that meets the needs of our riders and remains consistent with Governor Phil Murphy’s Energy Master Plan.’’

The Board also created an ad hoc Energy and Sustainability Policy Committee to oversee NJ TRANSIT’s efforts and ensure renewable energy technologies are incorporated into the $557 million power reliability project. The Committee will be comprised of Board Members Cedric T. Fulton, Sangeeta Doshi and James D. Adams. The Special Board Committee’s meetings will be open to the public to provide increased opportunity for public engagement.  The committee will also consider issues related to zero emission fleet vehicle deployment, adoption of NJ TRANSIT’s first sustainability plan, and other issues as may be appropriate.

The competitive bidder stipend program approved by the Board tonight will encourage short-listed project proposers to make the most use of renewable, green energy options in their bid proposals.

Developers will apply via a two-step procurement process involving an initial Request for Qualifications (RFQ) that will seek to establish a pool of qualified proposers followed by a Request for Proposals (RFP) that will require the qualified proposers to submit comprehensive technical and financial proposals to integrate renewable or other zero emissions energy technologies into the proposed Microgrid Central Facility. Each qualified team will be awarded a stipend valued at $1 million after completion of the RFP step, with the total anticipated value of the stipend program not exceeding $3 million.

NJ TRANSIT is in the process of hiring a renewables energy consultant to assist in the multi-step design and feasibility process.  The consultant will assist in maximizing the renewables scope of the project, conduct a review of recent utility scale renewables and storage projects of similar capabilities, support the evaluation of renewables team experience in response to the RFQ, and assist with drafting of the RFP.

In the wake of Superstorm Sandy, the NJ TRANSITGRID facility was envisioned as a primarily natural gas turbine powered facility. However, NJ TRANSIT and Governor Murphy are committed to a microgrid capable of employing, to the greatest extent possible, renewable generation and energy storage technologies capable of providing highly reliable power to a core segment of NJ TRANSIT and Amtrak’s critical service territory during extreme weather or outages in the commercial power grid.

NJ TRANSIT has been awarded more than $409 million in federal funds for NJ TRANSITGRID.  The project is a result of a partnership between NJ TRANSIT, the New Jersey Board of Public Utilities, the U.S. Department of Energy, and the Federal Transit Administration.

Jeff Tittel, Director of the New Jersey Sierra Club, stated, “What’s important about this is that this process will open up looking at all types of alternatives.  We see this as a win-win-win for New Jersey — that it will create jobs, reduce greenhouse gases…and it will power the transit system.”