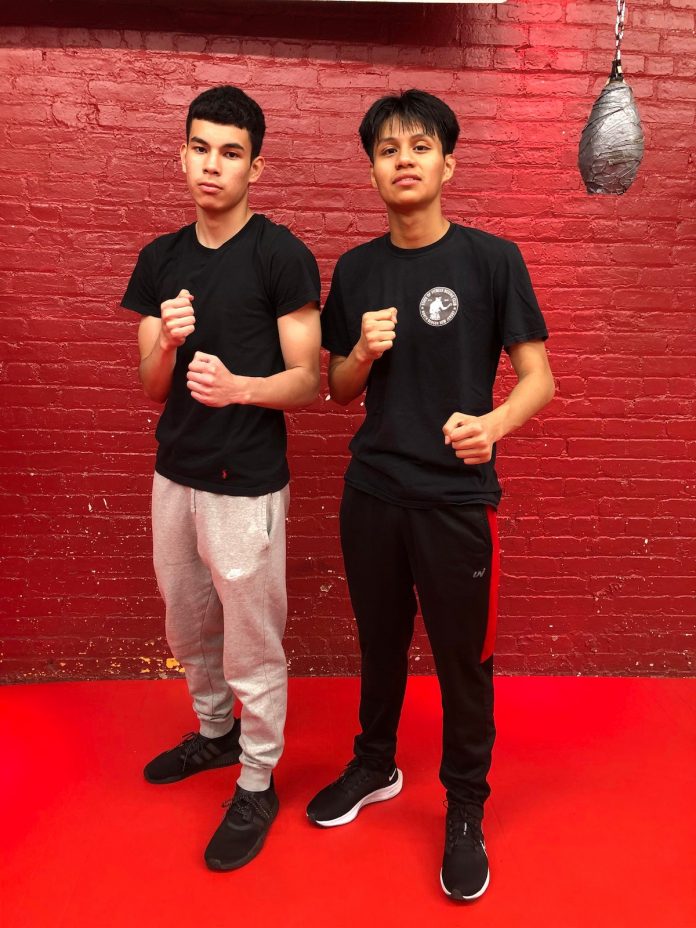 Photo Credit:  State of Fitness Boxing Club
Four boxers representing North Bergen’s State of Fitness Boxing Club will be in action tonight, Friday, May 27 on an amateur event in Boonton.  Josh Vivar and Jair Calixto, both students at North Bergen High School, plus Hussein Harb of West New York and Yadir Ibarguen of Paterson will compete in separate bouts at Aces Boxing Club.
Vivar, 15, will face Ahmed Ouedraogo, 16, in a 132-pound bout. Vivar is coming off his first win at the same venue a month earlier, and will be facing the boxer who had previously defeated his gym mate, Tommy Gutierrez.
Calixto, 16, will face Makai Moore, 14, in a 125-pound bout. The hard-charging Calixto is looking to bounce back from his first defeat, and will be facing a boxer who is trained by his father/pro fighter Steve Moore.
Harb, 28, will face Tyrone Adams of Washington D.C. in a 165-pound matchup. Harb, a native of Lebanon, is a graduate of Memorial High School, where he excelled on the cross country running team. Harb has a record of 2-1 and is a former N.J. Diamond Gloves champion, while Adams has a record of 3-1.
Ibarguen, 27, will be making his amateur debut against Ziad Amer, 25, who enters with a 0-1 record. Both fighters are expected to weigh 156 pounds.
Vivar is trained by Mike Pacheco, while Calixto is trained by his uncle Eric Rosas. Harb is trained by Desmond Boyle and Ryan Songalia, while Ibarguen is trained by Joe Matos.
State of Fitness, located at 508 73rd Street in North Bergen, opened in 2016 and is owned by Desmond Boyle, senior firefighter at the North Hudson Regional Fire Department. The gym has developed numerous amateur champions from tournaments such as the Golden Gloves, Diamond Gloves and Battle on the Beach.
Aces Boxing Club is located at 718 Main Street in Boonton, N.J. Tickets are priced at $40 for general admission and $20 for children.   They may be obtained by visiting  www.stateoffitnessboxingclub.com    The first fight is scheduled for 7 p.m.