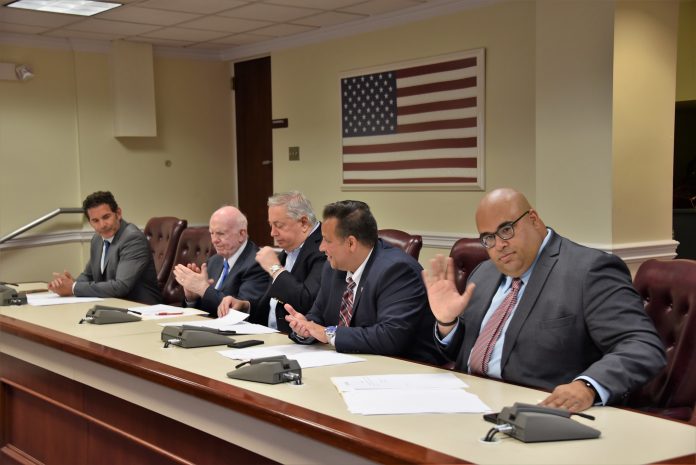 During Wednesday’s North Bergen Board of Commissioners’ meeting, 19-year old, former North Bergen High School graduate and current Montclair State University student Julian Munoz, was honored with a proclamation for his heroic actions in rescuing a woman from her car during Tropical Storm Ida.

Munoz heard the woman screaming.  Her car was in several feet of water, with the water having risen above the steering wheel.  Without hesitation, Munoz, a lifeguard at the North Bergen Municipal Swimming pool complex, waded through the rising water and carried the woman out of the car to safety.

The Commissioners also honored former Business Administrator Christopher Pianese who retired from the position he held for nearly twenty years on July 1.  Pianese worked for the town since 1989 as Assistant Comptroller, becoming Administrator in 2002.  Mayor Nicholas Sacco said the day he found out Pianese was retiring was “the worst day of my life.”

Pianese was responsible for getting the Tonnelle Avenue corridor designated a Redevelopment Zone, leading to a $250 million revitalization of the area.  He also managed the construction of a $6 million, award-winning town swimming pool complex and a $5 million, municipal court complex at the same time, which ultimately lowered the town debt.  Moody’s bond rating of the township also increased during Pianese’s time.

Those are just a few of the accomplishments achieved during Pianese’s tenure in Town Hall.