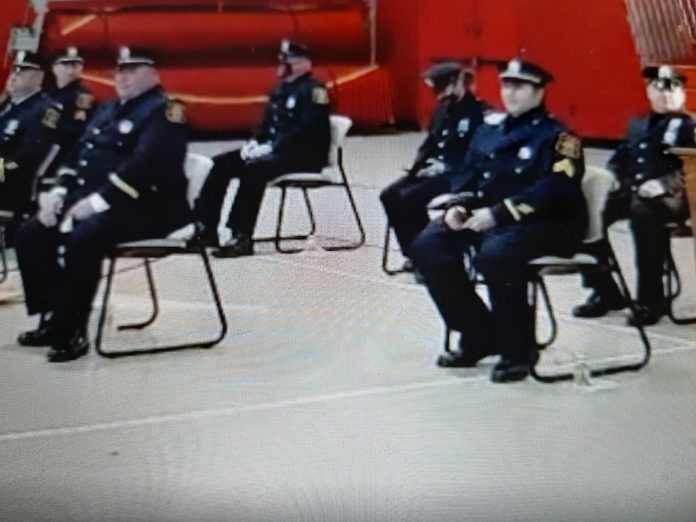 During a ceremony held at the North Bergen Recreation Center on Wednesday afternoon, the township’s Police Department promoted seven officers.  Promoted to the rank of Deputy Chief were David Corbisiero and Robert J. Farley, Jr.   Receiving a promotion to the rank of Lieutenant were Edward Moyano and Anthony Caramucci.  Elevated to their first supervisory rank of Sergeant were Constantinos Apostolakos, Kaylan Tarabocchia and Yusuf Yousef.

Chief Peter Fasilis, who was promoted to the Department’s highest rank this past spring following the retirement of Chief Robert Dowd, served as Master of Ceremonies for the first time.  Along with Public Safety Commissioner Allen Pascual and Mayor Nicholas Sacco, the Chief praised the accomplishments of each of the six men and one woman who were promoted today.

Chief Fasilis, in his remarks said, “Defund the police, we’re hearing a lot about that. This administration understands the importance of maintaining a fully staffed, adequately trained, and properly equipped police department in the 21st century.”

Commissioner Pascual added, “We don’t defund our police, we fund them. And I speak for my colleagues, we are 110 percent behind the men and women of the North Bergen Police Department.”

Mayor Sacco mentioned that when he was first elected to the Board of Commissioners in the mid-eighties, the township had only 2 patrol cars and approximately 70 officers, many of whom had to ride the bus to get to work.  Those totals have certainly gone up over the past 35 years or so for the betterment of the community, its residents and businesses.

North Bergen’s Police Department, which has been serving and protecting the township since 1907, received accolades during the ceremony for it commitment to duty, honor and courage.