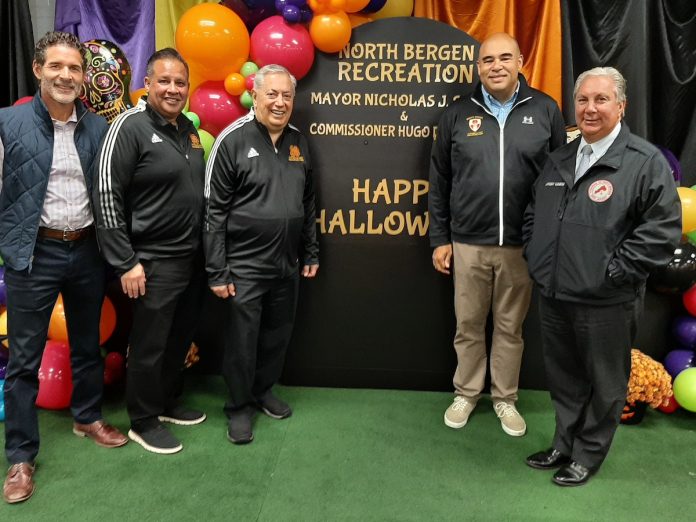 It’s a tradition that has gotten bigger and better as the years have gone by….the annual, North Bergen Halloween bash put on by the township’s Recreation and Parks Departments and the Board of Commissioners.

In addition to receiving baskets of candy and other goodies, the children and their families had an opportunity to have their pictures taken with the Mayor and Commissioners, as well as one of their elected state legislators, Assemblyman Pedro Mejia.

Inside the Rec Center’s three, huge gymnasium’s, rooms were set up with popcorn stations, a balloon animal creation booth, bouncy houses and scary, inflatable monsters, witches and ghouls.  Plenty of spots for parents to take pictures of their happy children.

Outside there were carnival attractions where kids could win prizes.  And on the baseball diamond there were huge, bouncy house attractions.

The event opened up a bit earlier than anticipated, approximately 5:50 pm, because the line of families waiting to enter the event stretched around the block.

Monday’s party was one of several North Bergen events held for Halloween over the past several days.  The branches of the township library held several events.  A doggie Halloween event took place in Braddock Park on Sunday and a truck or treat event drew upwards of 4,000 children according to the Commissioners.

Recreation Commissioner Hugo Cabrera commended the employees of his Rec Department and the Parks Department for working several weeks to set up the event, purchasing all of candy and prizes, and making sure Monday went off without a hitch.

By the smiles on the parents’ and children’s faces, it most certainly did.