Tuesday’s event follows Sunday’s demonstrations in Cuba by the general population who have lived under a Communist dictatorship for six decades.  The situation has worsened in recent months, as the coronavirus has spiked, and the residents do not have medicines.  Food is in short supply and what food is available is extremely expensive.  Basic human rights are being violated, as they have been for years.

Earlier today, a press release was circulated by the above named individuals, along with US Senator Bob Menendez and Congressman Albio Sires, both of whom are Cuban Americans.  The joint statement denounced Republican Gubernatorial Nominee, and former Assemblyman Jack Ciattarelli, for, what these Democratic elected officials believe, is his politicization of the Cuban liberation rally. 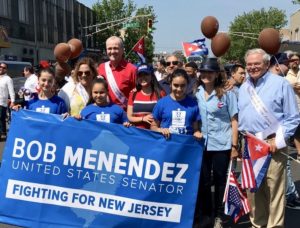 The joint statement reads, “We stand united in our support of the Cuban people in their fight for freedom and against the repressive acts of an authoritarian regime. Whether you are an American citizen from Cuba, or a newly arrived immigrant looking for a better life, New Jersey is a place where all 9.3 million residents can grow and prosper — New Jersey is the opportunity state. “Unfortunately, Republican Gubernatorial nominee Assemblyman Jack Ciattarelli is someone who views this diversity as a threat. Assemblyman Ciattarelli has run a campaign of division — division along urban or suburban lines, division across income lines, and division across racial and ethnic lines. “After supporting the rhetoric and bigotry of the Trump administration, Assemblyman Ciattarelli is now attempting to use our vibrant Cuban community as a pawn for his own political purposes. We wholeheartedly reject this opportunistic way of thinking, and won’t allow a politician with a self-serving agenda to weaponize the Cuban people’s suffering and drag us back to the days when our diverse communities were put into silos and left behind.”

Hudson TV caught up with Ciattarelli prior to the start of Tuesday’s rally.