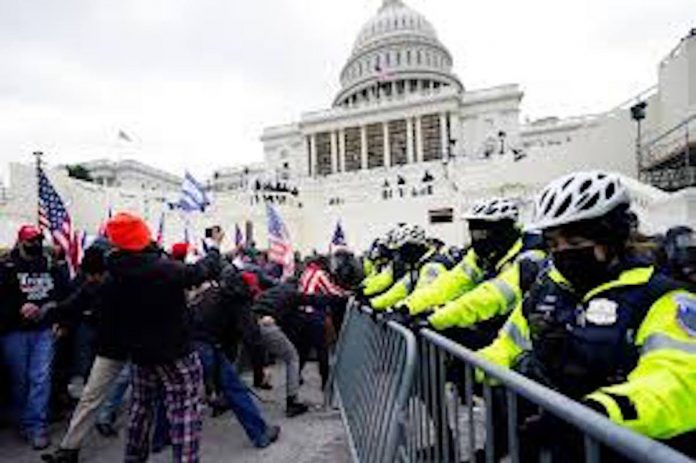 Hours after supporters of President Donald Trump rioted at the United States Capitol on Wednesday afternoon, members of Congress completed what they had begun before all hell broke loose outside and inside the hallowed halls of democracy.  They confirmed the Electoral College votes and guaranteed the January 20 inauguration of former Vice President Joe Biden as the next President of the United States.

Wednesday’s actions by what can be described as cowards, incited by the President himself, will undoubtedly go down as one of the worst acts of sedition in our nation’s history.  There is no justification for the acts of violence our nation witnessed.  Every American citizen should be ashamed by what took place.  Lawlessness, a death inside the Capitol building and a stain on the true meaning of democracy and our way of government.

Every Republican, every Trump supporter should be outraged.  Instead of peacefully participating in the transition of Executive Power, the President encouraged for weeks what ultimately played out on Wednesday.

“Today, I shed a tear for our country, which for centuries has inspired the world through its commitment to democracy and the rule of law.  From Moscow to Beijing and beyond, autocrats are likely smiling as they witness America in disarray, at war with itself, and no longer a credible messenger for the democratic values that have always defined our great Republic.

“How we arrived at this moment, with domestic terrorists storming Congress and desecrating the Capitol, should be no mystery.  This was not an act of patriotism, but an act of sedition.  For months, President Trump has fed Americans a steady diet of lies and disinformation in an effort to overthrow the November 2020 election and cling on to power.
“This afternoon, the President poured fuel on that fire by inciting a lawless and violent takeover of the United States Capitol.  But he alone is not solely responsible for today’s chaos and disorder.

“For weeks, the same Republicans behind a meritless effort to disrupt the constitutionally-mandated certification of President-elect Biden’s 306 electoral votes have parroted Donald Trump’s wild and baseless conspiracy theories.  It is outrageous that some members of the House and Senate would spread lies instead of upholding their oath to the Constitution, to stand up for truth, democracy, and the rule of law.

“That is why as soon as the Capitol building is secured, we must immediately resume our constitutional duty, certify the Electoral College results, and reaffirm the will of the American people, who voted in unprecedented numbers for the Biden-Harris ticket.  And if the results in Georgia are any indication, the voters have rejected the President’s poisonous effort to taint our democracy, and are ready for a new Democratic Majority in the Senate to get to work advancing President-elect Biden’s bold agenda.

“Accepting losses at the ballot box is never easy—but it is the American way.  Should Americans lose their faith in the integrity of our elections, from the White House down to the school board, we may soon be left with nothing but the shadow of a once great Republic.

“It is a dark day in our country’s history.  But we will withstand it.  We will return to the chambers.  We will finish counting the Electoral College votes—no matter how long it takes—because our democracy is alive.  And we will certify Joe Biden and Kamala Harris as the next President and Vice President of the United States.”

“Yesterday we witnessed an unprecedented and malicious attack on a pillar of our nation’s democracy – the certification of a free and fair election as prescribed by the U.S. Constitution. The mob of rioters was a sickening display of everything America is not – this was not patriotism, but rather terrorism. After seeing the response in Washington, D.C. to the BLM protests this past summer, the lack of preparation for the well publicized event that was supposed to be a protest, but clearly with the tension and division in this country predictably would lead to violence, at a minimum raises the question – Are all Americans and their beliefs equally protected by the law? As Prosecutors it is our sworn duty to make sure everyone is treated equally under the law and call out when it is not the case.

“In the process, four lives were cut short, many individuals were injured and fear was felt by many. We send our condolences to all impacted by these unnecessary events and a strong message to anyone who supported it that these actions will not be tolerated.

“The attempt at disrupting the constitutional process ultimately was not successful, but we affirm that the rule of law must always be upheld equally and all who hold elected office must ensure that the sanctity of our democratic process is preserved.

“As the statewide organization representing our legal system and the rule of law, we denounce the actions yesterday and send gratitude and thanks to the men and women of multiple law enforcement agencies and the National Guard who defended our Capitol. While yesterday was a dark day in our country’s history, we believe that the unwavering strength of our founding beliefs in liberty and justice will guide us through this moment and deliver us to a better, stronger union.”

“Early this morning, the House and Senate came together to fulfill their constitutional obligation and certify the Electoral College count, in spite of the insurrectionist attempt to disrupt the certification. President Biden and Vice President Harris will be sworn in to office.  Our democratic processes held. Our institutions are much stronger than the forces that tried to break them.”

New Jersey Senator Cory Booker stated,  “We must complete our constitutional duty and start to repair our democracy. It’s disgraceful that Trump and his allies have enabled this violence and attacks on our democracy. Grateful to the Capitol Police for keeping us safe.”

Over the final two weeks of the Trump Administration, which has seen many people resigning, we can only hope Trump supporters realize the divisiveness of their actions.  Hopefully the President will allow the final 13 days of his time in the Oval Office to play out without any future incidents putting a further stain on his time in office.

That would make the start of 2021 better than the disaster 2020 turned out to be for all of us.