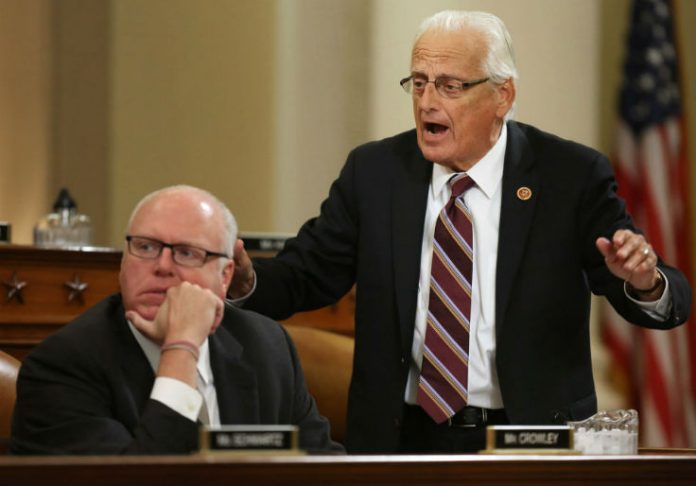 As Congress’s leader in the fight to obtain Trump’s tax returns for congressional review, Rep. Pascrell penned the following op-ed to express his disappointment in the Supreme Court’s decisions and to reaffirm the importance of exposing Trump’s financial entanglements to sunlight.

The Supreme Court’s decisions in the Trump tax returns cases were bittersweet. The good news is the court affirmed the principle it established during Watergate that no president is above the law. But the rulings will allow Donald Trump to continue to obstruct myriad investigations into his finances.

More than most Americans, I have closely followed the wrangling over obtaining Trump’s financial records.

Since just weeks after he was sworn into office, I’ve been leading efforts in Congress to obtain Trump’s business and personal tax returns.

It may be forgotten today, but throughout his campaign, Trump vowed that he would release his returns. But he has never done so, falsely claiming that he is under an IRS audit that prevents their disclosure. Nearly four years into his tenure, his White House continues to trot out that lie while his returns remain hidden.

With the administration awash in so much corruption, exposing Trump’s returns now may strike many as quaint, even unnecessary.

I have never accepted that logic.

Trump entered office with an unprecedented number of business entanglements and conflicts of interest. Unlike previous presidents with extensive business interests, Trump and his family remain in control of an opaque corporate empire — one he has refused to relinquish.

And there is overwhelming evidence that Trump and his family members have used his office to reap obscene personal profits, including from foreign governments. But we know only a fraction of the potential crimes Trump is committing.

So the passage of time has not dulled the importance of seeing his returns. The American people deserve to know if their chief executive is a crook.

It has been a winding 3½ years. Starting in February 2017, I began offering motions, resolutions and amendments — any legitimate tool I could find that would let Congress obtain Trump’s tax returns.

It was our office that discovered a long-forgotten 1924 federal statute that allows our tax-writing Ways and Means Committee, on which I sit, to obtain the tax records of the president simply by asking the U.S. Treasury secretary.

If only it were that easy.

In the 115th Congress, Republicans blocked all 18 of my attempts to obtain the tax returns. After Democrats won control of the House in 2018, the Ways and Means chairman submitted a request for Trump’s returns. Our demand has been stymied by Secretary Steve Mnuchin, who to this day continues to break the law to shield Trump.

It is important to put into proper context Trump’s obstructionism. He and his enablers have blockaded all congressional inquiries into his lawbreaking to an extent unprecedented in American history. Behind his lawyers’ legalese and his own bellicose tweets, Trump has argued that he is above all laws and democratic norms.

Which brings us to the Supreme Court. The court looked at attempts by three other House committees — Oversight and Reform, Financial Services, and Intelligence — to obtain Trump’s tax returns, as well as a New York State criminal probe.

The New York case is a clear rebuke of Trump. The court found that Trump is not above the law and the Manhattan district attorney can subpoena his tax returns. Great.

The congressional cases are a more mixed bag. The court agreed that Congress may seek the chief executive’s tax returns and other records but imposed a straitjacket of constitutionally dubious requirements.

The decisions are unhelpful in both the short and long terms.

In the short term, the justices gave Trump and his lawyers a green light to continue obfuscating these inquiries. Given the leeway the justices created and the slowness of judicial proceedings, it is almost certain Trump will run out the clock on these cases until after November. Justice delayed is justice denied.

In the long term, the court’s decision will erode Congress’ authority to rein in the imperial executive. For over 75 years the presidency has ballooned in size, often at the expense of the Article I branch. By conjuring special conditions for legislative oversight of the executive — conditions nowhere enumerated in the Constitution — the court has further contributed to this imbalance.

Richard Nixon’s White House cooperated with the Watergate inquiry because Nixon respected Congress’ existence as a co-equal branch. Trump has no such reverence for the Constitution’s balance of powers and has tried to hinder every aspect of congressional oversight, arguing, in essence, that Article II is all-powerful.

If ever there were a moment screaming for an emphatic, unqualified rejection of these abuses, it was this moment. The justices did no such thing and, in many ways, validated Trump’s obstructionism by creating a precedent future corrupt presidents more clever than Trump will ruthlessly exploit.

Importantly, the lower courts in these cases can still move against Trump’s obstruction, and they should do so expeditiously.

Furthermore, the Ways and Means Committee’s pursuit of Trump’s taxes backed up by clear law continues. We are not giving up.

Even with an election approaching, we cannot — we must not — let up until complete sunlight shines on Donald Trump’s crimes.