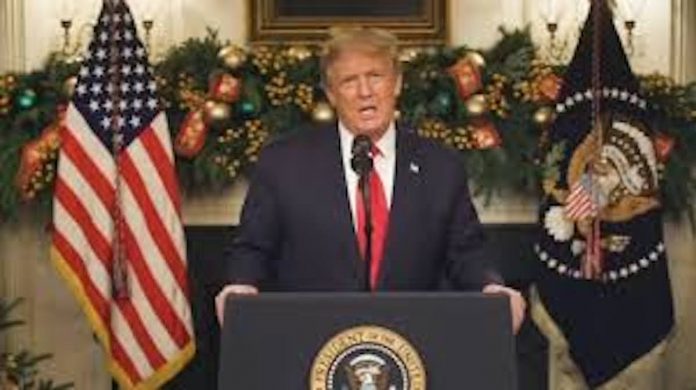 24 hours after Congress agreed to a bipartisan stimulus package on Monday night totaling approximately $900 billion, President Donald Trump, in a video posted to Twitter, called on Congress to amend the spending plan.  Calling it “a disgrace,” the President hinted he would not sign the relief package unless changes were made.

“I am also asking Congress to immediately get rid of the wasteful and unnecessary items from this legislation, and to send me a suitable bill, or else the next administration will have to deliver a COVID relief package, and maybe that administration will be me,” Trump said.  Just one more indication that the President still believes he will be Commander in Chief at 12:01 pm on January 20, 2021.

If the President does not sign the relief bill, the United States Government will come to a grinding halt on December 29.

House Speaker Nancy Pelosi immediately responded to the President’s Twitter post by saying Congressional Democrats would enthusiastically return to the Capitol to approve the $2,000 stimulus checks.

“Republicans repeatedly refused to say what amount the President wanted for direct checks,” she posted on Twitter Tuesday night after Trump’s video message. “At last, the President has agreed to $2,000 — Democrats are ready to bring this to the Floor this week by unanimous consent. Let’s do it!”

In its current form, Trump says the relief package, which includes $1.4 trillion in omnibus spending, has “almost nothing to do with COVID.”  The President says small businesses, especially restaurants, have not been given enough financial relief, and they “have suffered so grievously.”