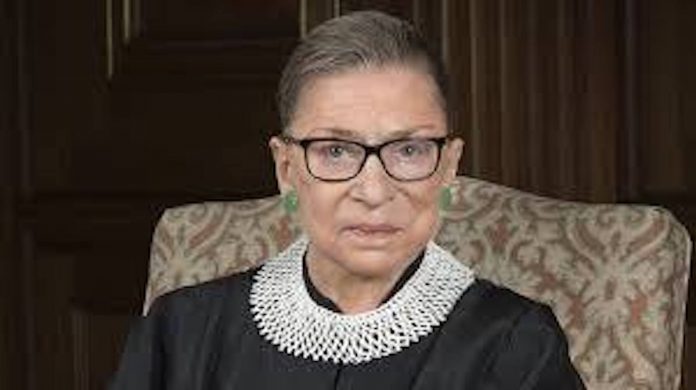 She was a liberal and a legal and feminist icon.  Ruth Bader Ginsburg, appointed by President Bill Clinton to the United States Supreme Court in 1993, has died at the age of 87.  Although small in stature, she was a giant in every respect.

She passed on Friday at her home in Washington, D.C. from complications of metastatic pancreatic cancer, her fourth battle with various forms of cancer.

Using her high profile position, she fought gender discrimination and worked every day to bring the Court’s liberal wing together.  In the words of the Supreme Court’s Chief Justice John Roberts, “Our nation has lost a justice of historic stature.”  She never wavered from her calling, so much so, that lying in a hospital bed, recovering from cancer surgery two years ago, she cast the deciding vote when the High Court all but put a nail in President Trump’s attempt to impose immigrant asylum restrictions.

Reaction to Ginsburg’s death has come from all circles.  Congressman Albio Sires (D-District 8) stated, “Ruth Bader Ginsburg was the very best of us. She has made our country a more equal place and from the very beginning of her career as a public figure, she believed in what our nation could be. From the time she was still at school, she faced down discrimination and prejudice and worked her way to the highest court in the land. Her determination and dedication have helped shape an entire generation of Americans who look to her as a role model and who have had their day to day life influenced by her judicial decisions. She used her legal skills to further women’s rights and strip back laws that were inherently unfair and unjust. Justice Ginsburg’s accomplishments are too numerous to count but when you look at how much she means to so many, you can begin to grasp how much she has done for us. My family, my office, and I are eternally grateful for everything she has given to our country. Justice Ginsburg said “real change, enduring change, happens one step at a time”. She took those steps and has forever changed America for the better.”

NJEA’s officers, President Marie Blistan, Vice President Sean M. Spiller and Secretary-Treasurer Steve Beatty issued this joint statement, “We offer our deepest sympathy and condolences to the family and loved ones of Justice Ruth Bader Ginsburg. She was a giant of American history, a trailblazer who made our nation more fair and just for all people. She upheld the highest principles of our Constitution and helped America move closer to its founding ideals. Her passing is an immeasurable loss to the United States Supreme Court and the United States of America. We join the entire nation in honoring her legacy and mourning her death.”

New Jersey’s senior United States Senator Bob Menendez stated, “America has suffered an incredible and irreplaceable loss in the passing of Supreme Court Justice Ruth Bader Ginsburg tonight. My thoughts and prayers are with her family, and my heart is with every American who mourns the loss of a hero this evening.

“Ruth Bader Ginsburg spent her entire life breaking down gender barriers with unstoppable tenacity, intellectual might, and an unshakeable commitment to justice. She was one of only nine women in her law school class, and while she graduated at the top, firms wouldn’t hire her because she was a woman.

“It was as a professor at New Jersey’s own Rutgers Law School where Ginsburg began her life’s work fighting the same gender discrimination she herself faced.  She founded the Women’s Rights Project at the ACLU and took on dozens of discriminatory laws, winning case after case.

“During her over four decades on the bench, first on the U.S. Court of Appeals for the D.C. Circuit, and then to the Supreme Court in 1993, Ginsburg garnered a reputation as an intellectual force and powerful jurist. Her opinion in U.S. v. Virginia changed the course of history.  And her dissenting opinions in Hobby Lobby, Ledbetter, and Shelby County turned to rallying cries for those fighting for justice.

“Few individuals have moved this nation forward as meaningfully as Ruth Bader Ginsburg, and we all owe her a debt of gratitude for creating a fairer, more just, and more equal world for all of our daughters and sons.

“Let us honor her wishes and let the American people choose the President who will appoint her successor on the Supreme Court.  The Senate must not move any nomination until next year.

“There will never be another Ruth Bader Ginsburg.  May her memory be a blessing, and may we honor her every day in our pursuit of justice.”

Menendez’s New Jersey Senate counterpart, Cory Booker said, “Ruth Bader Ginsburg was a true giant, an American hero and a warrior for justice. Our country mourns her loss deeply—we must honor her by carrying on her legacy of fairness and equality.”

Congressman Donald Payne, Jr. (D-District 10) expressed his thoughts, saying, “Terribly sad to hear that Supreme Court Justice Ruth Bader Ginsburg has passed away at 87. She was a champion for women’s rights and the rights of the less fortunate. My condolences to her family, friends, and all Americans who support her work. This is a tragic loss.”

As the November 3rd election moves closer, will President Trump fill the vacancy on the Court?  If so, it will obviously be a Conservative pick.  Democratic Presidential nominee, former Vice President Joe Biden says confirmation of a new Justice should wait until after the Presidential election.  When Justice Antonin Scalia died in 2016, Republican Senate Majority Leader Mitch McConnell refused to allow the Senate to consider then-President Barak Obama’s nominee, Merrick Garland.  Following Ginsburg’s death last night, McConnell said he will permit the Senate to vote on President Trump’s choice to fill the vacancy.