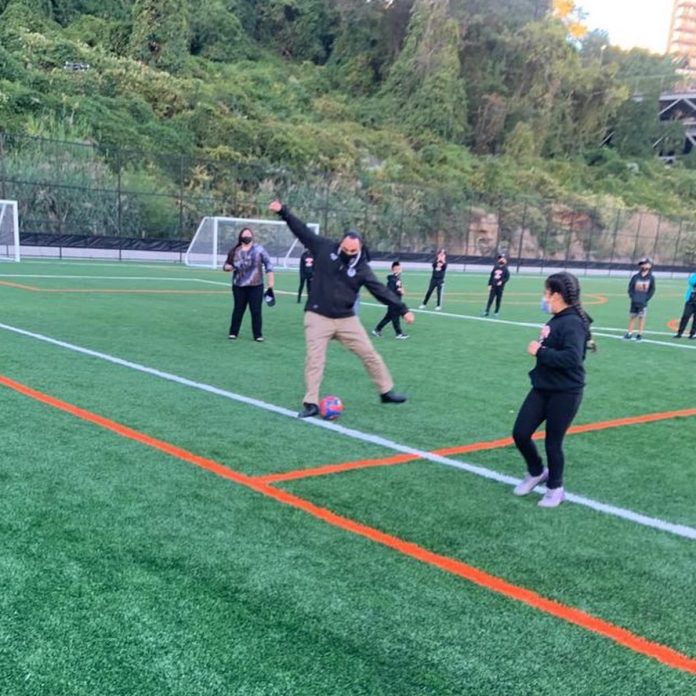 West New York Mayor Gabriel Rodriguez, members of the Board of Commissioners, officials from the town’s Recreation Department and youth from the soccer program were on hand this week for the official re-opening of Centennial Field, the town’s soccer field along the Hudson River waterfront.

The West New York recreation soccer program has grown substantially in recent years, and the newly rehabbed field will go along way toward enhancing the enjoyment of the town’s children who love participating in soccer.

Parks and Public Property Commissioner Victor Barrera says,  “West New York residents deserve these kinds of community amenities, and our entire team is committed to delivering on our promise to move our town forward with actions like this.”

A little more than a year ago, the Mayor and Commissioners committed to renovating three, major parks in the municipality…Centennial Field, Miller Stadium and Patricia McEldowney Field.  Bonding ordinances were approved for each of the sites unanimously on June 5, 2019.  According to the mayor, the improvements, including those at Centennial Field, are being made at no cost to West New York taxpayers and will be funded by county and state grants the town has secured.  “Our parks have been severely neglected in recent years, denying our children and all residents the open space and recreational opportunities they deserve,” Rodriguez said.

Specific improvements at the newly, renovated Centennial Field include a drainage system and turf, playing surface.