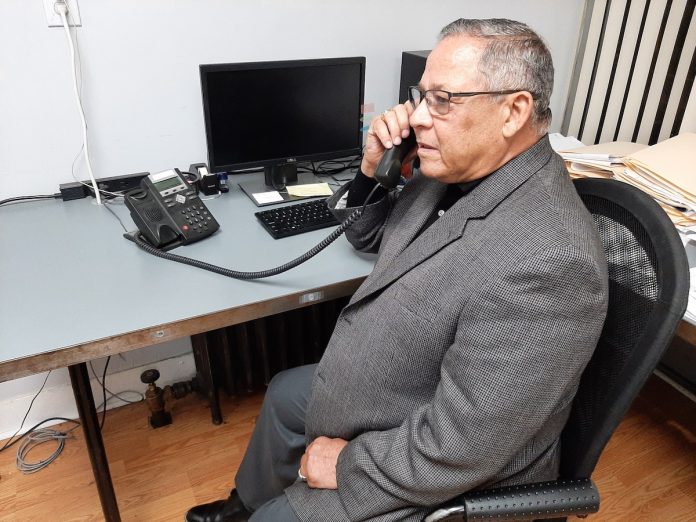 When voters in the 8th Congressional District go to the polls on Tuesday, or sooner with early voting, they will be electing a new member of the United States House of Representatives, as veteran Congressman Albio Sires chose not to seek re-election.  The man looking to pull off a huge upset is Republican Marcos Arroyo of West New York.

A native of the Dominican Republic, Arroyo came to the United States in 1965.  A married father of two, grown children, Arroyo has never sought elected office prior to this Congressional attempt.

Arroyo, who has been a building manager since the 1970s, formerly owned a beauty parlor with his wife on Bergenline Avenue.  He also is employed as a construction manager, having been associated with A M Architect’s Studio in Clifton for the past seven years.

Arroyo knows he has a steep hill to climb in this election, as his Democratic opponent is Rob Menendez, Jr., the son of New Jersey’s senior United States Senator Robert Menendez.  He says if he is fortunate enough to pull off an upset victory on November 8th, he will set his sights on three, top priorities when he takes office in January: working to reduce inflation; working to get gasoline prices lower so middle income residents of the district don’t have to feel as if their wallets are devoid of money; and immigration reforms, ensuring our borders are secure.  He says we still are in the throws of the pandemic, and we cannot be sure if people entering this country illegally are vaccinated.

Other areas of concern for Arroyo are store closings.  Since the COVID crisis began, many small, family-run businesses have been forced to close, and many have not recovered and remain shut.  Cutting taxes is also a top priority, as is securing our schools.  He says providing a safe environment for students, teachers and administrators cannot be stressed enough.

He would also like to see food prices come down, saying many senior citizens and families cannot afford the cost at supermarkets.

He says despite the odds, he has been receiving good feedback from residents districtwide, particularly from immigrant populations.  He will continue campaigning door to door over the final week.

If Arroyo pulls off the upset, which likely would be the most unexpected of any election nationwide, it would be the perfect birthday present, as his birthday is the day before the election.