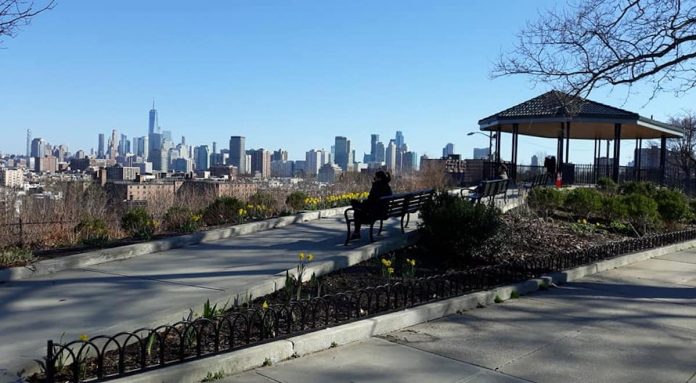 Jersey City Mayor Steven Fulop, city officials and Friends of Riverview-Fisk Park gathered this morning at the newly renovated, Heights section open space for a ribbon-cutting.  Located at 498 Palisade Avenue, at the corner of Bowers Street, overlooking the Palisades and Hudson River, the $2.15 million rehab was accomplished through the Open Space Trust Fund, the recently established tax funding source.

Among the people and groups that were singled out during this morning’s ceremony, were the late-Ward D Councilman Michael Yun, the Jersey City Parks Coalition and the Riverview Neighborhood Association as being instrumental in getting the project completed.

Mayor Fulop, in his remarks, said one of the things everyone learned during the past year of pandemic isolation, was the importance parks play in an urban setting.  He added that his Administration would continue to rehabilitate open spaces across the city.

The renovated park features plenty of grass, a fountain, a drinking station, and properly pruned trees.

The rehab took approximately one year to complete.

Here is the official press release from the city:

JERSEY CITY – Mayor Steven M. Fulop and the Municipal Council join the Riverview Neighborhood Association (RNA) to announce the full reopening of Riverview-Fisk Park following $2.1 million in much-needed upgrades for the complete renovation of the neighborhood park. Working with the local community to best meet residents’ needs, the improvements include a modernized infrastructure, restoration of historic elements, tree canopy preservation and expansion, and additional recreation features for kids of all ages to enjoy the outdoors.

“Especially in times like these with the pandemic over the last year, we realize now more than ever how important parks and open space is for a City. This is why we continue to invest in improvements to parks citywide,” said Mayor Fulop.

To complement the park’s renowned views overlooking the vast NYC skyline, the City also restored several historical monuments, including the gilded concrete sculptural bust of Henry Hudson, originally dedicated to the park in 1917.  A cast bronze eagle sculpture and a Theodore Conrad Dedication Plaque were each cleaned and refinished to further preserve the park’s historical significance.

“Planning and discussions with the City about the park began about five years ago. RNA presented a basic plan to the community to get feedback and input and priorities were then decided on.  We thank the Jersey City Division of Architecture and Engineering, the City of Jersey City, and Mayor Fulop for their hard work and cooperation regarding this beautiful renovation, and we look forward to future projects planned for the park,” Jocelyn Patrick, RNA President.

The City removed a concrete water fixture that hadn’t worked for decades and replaced it with an additional grassy area for recreation. A frost-proof ornamental water fountain has been installed and serves as a centerpiece of the entire park. A circular pathway was also paved to improve access to the weekly Farmers’ Market within the park.

“The Jersey City Parks Coalition is pleased to see the completion of the renovation in Riverview-Fisk Park. Five years of focused discussions and planning involving the City, as well as community outreach through the Riverview Neighborhood Association, yielded a park ready for the 21st century with new infrastructure and park features,” said Roger Heitmann, Board Member of the Jersey City Parks Coalition. “We thank the City of Jersey City and Mayor Fulop, and we look forward to future park projects.

Infrastructure upgrades made throughout the park include an improved irrigation system and electrical system. Stemming from the successful addition of splash pads at various other parks citywide, a new spray park has been installed to invite Jersey City’s youth to enjoy outdoor fun. Other recreational assets include a completely rebuilt bocce ball court to replace the deteriorated and unusable court on site.

In addition to the surface improvements, underground upgrades include new foundations, conduit, water lines, drainage lines, stormwater absorption, and site grading as part of the project, as well as the installation of a new water service line comprised of meters, backflow preventers, ground hydrants, and an irrigation system.

About The Riverview Neighborhood Association

Founded in 1983, the Riverview Neighborhood Association is one of the oldest and continually active neighborhood associations in Jersey City, primarily serving the eastern portion of Jersey City Heights. RNA is a 501(c)(3) non-profit organization that actively partners with neighbors, local government, and local organizations to improve the quality of life and foster pride in our neighborhood and surrounding communities.  Meetings are held on the second Tuesday of each month at 7:30 p.m.  All meetings are currently being held virtually until further notice.