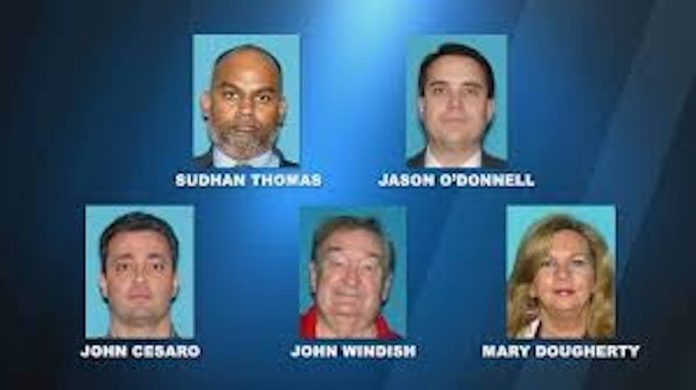 TRENTON – Attorney General Gurbir S. Grewal announced Tuesday that four former public officials and political candidates in New Jersey – including former Jersey City School Board President Sudhan Thomas and former State Assemblyman Jason O’Donnell – have been indicted by a state grand jury on charges that they allegedly took bribes in a major investigation of political corruption in Hudson and Morris counties conducted by the Office of Public Integrity and Accountability (OPIA).

The following four defendants were charged as follows in four separate indictments returned by the state grand jury on Jan. 20, Jan. 27, and Feb. 3:

“These indictments are an important step in our prosecutions of these defendants,” said Attorney General Grewal. “We allege that these former political candidates agreed to sell the authority of their public office or the office they sought in exchange for an envelope filled with cash or illegal checks from straw donors. The conduct alleged in these indictments is old-school political corruption at its worst— the kind that erodes public faith in government and that we are determined to root out.”

“These cases reflect one of OPIA’s core missions, which is to uncover and prosecute corruption in state and local government and related elections,” said OPIA Director Thomas Eicher. “Three of these defendants face potential mandatory minimum sentences for official misconduct in accepting bribes. New Jersey has some of the nation’s strongest anti-corruption laws, and we will use them to hold government officials accountable if instead of honestly and faithfully serving the public interest, they betray their duty by corruptly serving their own interests.”

Mary Dougherty, 60, of Morristown, N.J., a former candidate for Morris County freeholder, continues to face a charge of second-degree bribery in official and political matters filed by complaint-summons on Dec. 19, 2019.

The defendants were charged in an investigation by the OPIA Corruption Bureau which began in early 2018 and focused on political figures in Hudson and Morris counties who allegedly solicited illegal campaign contributions from the cooperating witness in return for promised official action to provide him with government work.

Additional details regarding the alleged conduct of the defendants, as set forth in the criminal complaints initially filed against them, are contained in the press release posted at this link:

Deputy Attorneys General John A. Nicodemo, Trevor Taniguchi and Eric Cohen are prosecuting the defendants, under the supervision of OPIA Corruption Bureau Chief Peter Lee and Counsel to the Director Anthony Picione. OPIA Chief of Staff Pearl Minato, former Deputy Attorney General Anthony Robinson, and former OPIA Deputy Chief Jeffrey Manis also assisted in the case. Attorney General Grewal commended all of the prosecutors and detectives who conducted and supervised the investigations for the OPIA Corruption Bureau, under the leadership of OPIA Director Thomas Eicher.

The charges are merely accusations and the defendants are presumed innocent until proven guilty.

Attorney General Grewal created the Office of Public Integrity and Accountability in September 2018 to combat corruption and strengthen public confidence in government institutions. In December 2019, the Attorney General issued a directive codifying OPIA and making it a permanent part of the Attorney General’s Office. That directive established the OPIA Corruption Bureau as the lead office within the Department of Law & Public Safety for the investigation and prosecution of state criminal violations involving corruption and abuse of public trust.

OPIA has a toll-free Tipline 1-844-OPIA-TIPS for the public to report corruption.  The AG’s Office has an Anti-Corruption Reward Program that offers a reward of up to $25,000 for tips leading to a conviction for a crime involving public corruption. Information is posted at: http://nj.gov/oag/corruption/reward.html.