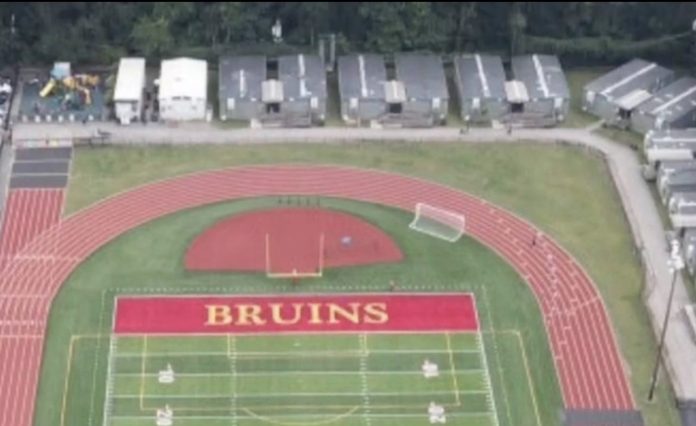 For 20 years, North Bergen’s preschool has been illegally situated in Braddock Park.
State regulations say Braddock Park can ONLY be used for recreation and open space use; schools, condos, etc. are not permitted in the park.

Is Mr. Cabrera so irresponsibly detached from reality that he thinks 4-5 year olds are better off in unsafe preschool trailers than in state-of-the-art permanent school facilities?
Why doesn’t Mr. Cabrera live in a trailer?

There should be no doubt that the North Bergen Preschool trailers and their location were/are unsafe…
The trailers violated important regulations requiring 2 fire exits in each trailer.
This violation persisted for years, even after 2 trailers burned down.
County and Township engineers recommended widening the narrow preschool roadway and installing a sidewalk – neither was done.
The roadway doesn’t even have a stop sign or a traffic light where it meets busy J F Kennedy Blvd.
The trailers’ walls are severely rotten and groundhogs burrow under them.
Electrical conduit was falling down and tree limbs rested dangerously on trailers’ electric wires.
Dangerous people lurk in the woods behind the trailers and the preschool’s 4 foot fence, with its gates unlocked all day, won’t protect preschoolers or teachers from harm.

Mr. Cabrera falsely wrote I am “against building more functional recreational facilities and ball fields in the park”.
What I am against is attempts by officials to prevent the general public from using recreational facilities/ball fields.
Ball fields in Braddock Park were recently renovated and then officials put up a sign saying they were only usable by permit holders who had proof of $2 million liability insurance.
This was environmental racism; it was an attempt to keep mostly poorer residents, in a mostly Hispanic community, off the fields.
Recreational facilities should not be fenced and locked, catering only to the wealthy, such as double dippers like Mr. Cabrera.

Mr. Cabrera has his facts wrong and his letter is an affront to those of us in the community who are not paid for our efforts to fight for better parks and schools.