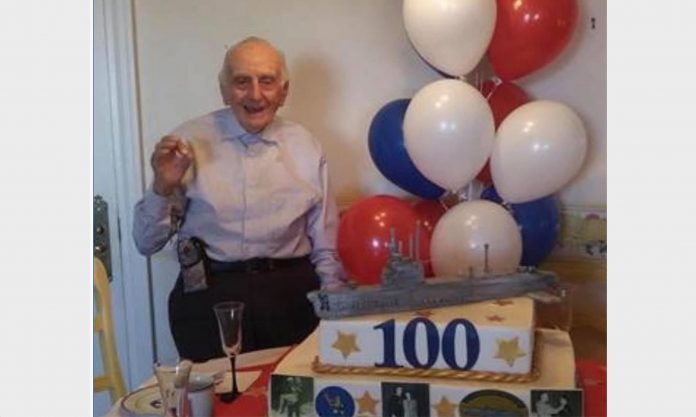 “On behalf of all of North Bergen I would like to congratulate Joseph on his 100th birthday,” said Mayor Nick Sacco. “This magnificent milestone is truly a cause for celebration and to reflect on the wonderful life Mr. Mongelli has lived. We are grateful for his selfless service to our nation during WWII and look to him for inspiration on how to live a long, happy and healthy life.”

Joseph was born at home on September 8, 1920 to Ignazio and Maria Mongelli. He proposed to his future wife Rita Ferris in Hudson County Park in North Bergen and married while on a short leave from the U.S. Navy Submarine Division during WWII on December 9, 1943.

After returning to the war in the Pacific, Joseph was injured when the USS Lapon encountered enemy fire, and he was subsequently awarded medals by the U.S. Navy in late 1944. Joseph and his wife went on to have two daughters, Sharyn and Joni, who gave them a grandson, Damon, and a granddaughter, Joey.

In the early 1970s Joseph became an integral part in bringing the USS Ling submarine to New Jersey to memorialize those lost in submarine service during WWII. He is the leading voice in saving the USS Ling, which is docked in the Hackensack River, as a way of honoring the brave men he served with and who sacrificed their lives for our country on submarines during WWII. He continues to work tirelessly to preserve this important piece of history and has made it his mission to have the USS Ling Memorial relocated to Hoboken.

Joseph is a longtime resident of North Bergen, whose love and zest for life encourages and marvels his family, friends and community every day. He wakes up early every morning and, at the age of 100, goes to work driving buses for Alliance Bus Group in Carlstadt, NJ.

Joseph lives an amazing life characterized by devotion to his faith, family, and friends; hard work; healthy eating; honesty, humility, and humor; and inspires many with stories of his service to our country and commitment to his fallen comrades.