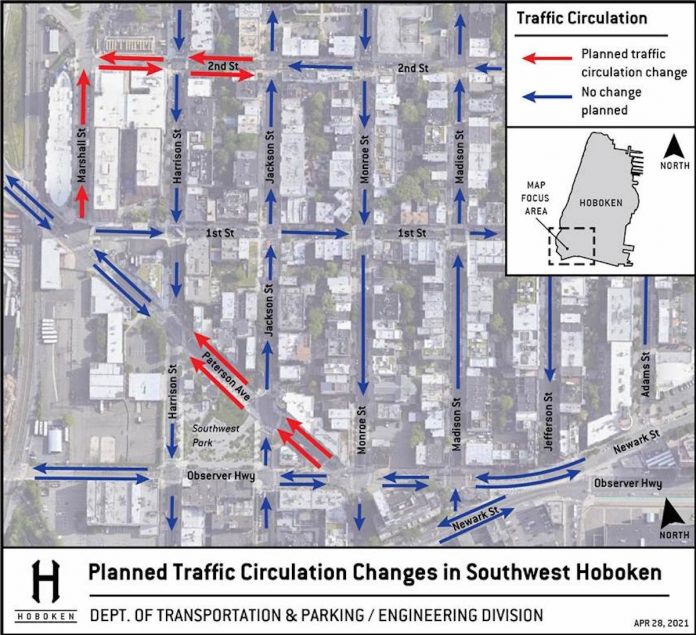 The changes in traffic patterns and traffic signal timings have been modeled extensively by the City’s consulting traffic engineer, Bright View Engineering, and overseen by Transportation Director Ryan Sharp and City Engineer Olga Garcia. Models predict up to a 20% average reduction in travel time delays in southwest Hoboken after implementing the new travel patterns.

The changes in traffic circulation patterns will also complement other circulation improvements to southwest Hoboken that were implemented in 2017 that included three new traffic signals on Observer Highway and new traffic patterns on Harrison Street, Jackson Street, Madison Street, and Jersey Avenue.

“I want to thank County Executive Tom DeGise for supporting the change in traffic pattern on Paterson Avenue,” said Mayor Ravi S. Bhalla. “Implementing these changes as a one-year pilot project is a great way to experiment with innovative solutions to long-standing traffic congestion challenges in southwest Hoboken. If there is even a fraction of the improvements in travel times that are predicted by the traffic model, the changes in traffic patterns will be a major quality of life upgrade for residents who commute through southwest Hoboken.”

“Mayor Bhalla and the city council have made a genuine commitment to improving traffic flow in southwest Hoboken leading to these traffic circulation pattern changes and other recent long-needed improvements,” said County Executive Tom DeGise. “Our hope is that traffic congestion will improve.”

“We’re hopeful that the pilot program will move vehicles more efficiently through southwest Hoboken”, said Council President Ruben Ramos. “We will also continue engaging both Jersey City and Hudson County officials with the ultimate goal to create a new road connection from Hoboken to Jersey City.”

The project will incorporate additional improvements beyond traffic pattern changes, several of which are aimed at helping to achieve the City’s Vision Zero goal of eliminating traffic-related deaths and injuries in Hoboken by 2030. These improvements include:

Construction is expected to begin on or about Tuesday, July 13, and will be tentatively sequenced as follows (weather and other conditions permitting):

1.      July 13-July 16: 2nd Street will be restriped and converted from one-way westbound to two-way between Marshall Street and Jackson Street