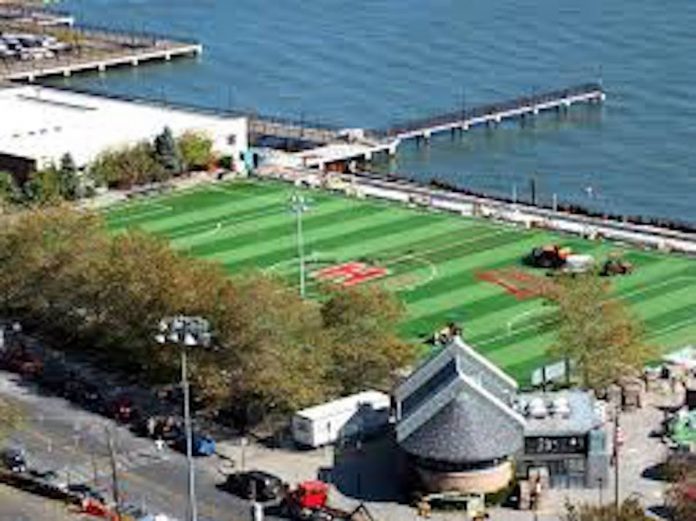 A joint rescue effort early on Sunday evening between the Hoboken Police and Fire Departments resulted in a Jersey City man having quite a story to tell his friends and relatives, albeit, one that might be considered a bit embarrassing, although it could have resulted in disaster.

According to Hoboken Detective Sergeant Jonathan Mecka, a 24-year old male had fallen into the Hudson River, just east of the Sinatra Park soccer field to retrieve a soccer ball, shortly after 7:20 p.m.   When officers arrived, a crowd had already gathered at the scene.

Two police officers retrieved their water bag from their vehicle.  A water bag is used as a rescue device.  It has a rope attached to one end.  It is thrown into the water to allow the victim to grab hold so rescuers on the shore can pull him to safety.

As more police and firefighters arrived, witness pointed out the exact location where the man fell into the water.  they were told he had been swept underneath the waterfront walkway next to the soccer field.

Detective Sergeant Mecka says, “The officers advised that the man could not be seen from the walkway and they feared he was stuck beneath it.  Ultimately, the water bag was deployed under the walkway and he was able to grab the bag.”

The victim was then pulled to the boat ramp located in front of the Blue Eyes restaurant where the Hoboken Fire Department helped him out of the river.  He was transported to a hospital because he said he had swallowed a lot of water.  He was examined at the hospital and released.

The identity of the man was not provided by police.

Certainly a story which could have ended a lot worse for the victim.