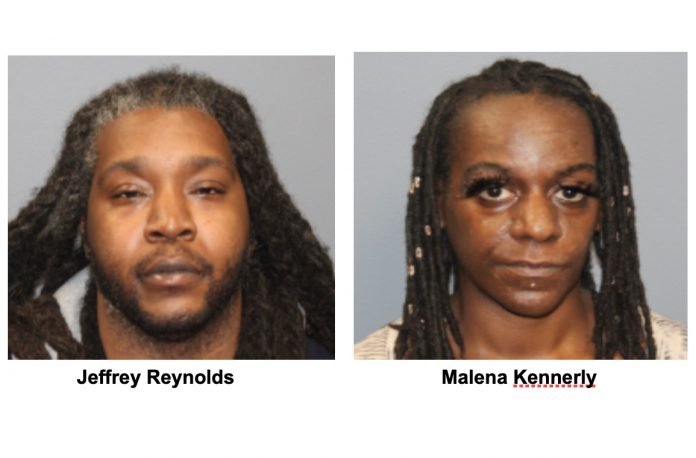 On February 10, 2021 at 7:54 P.M., Secaucus Police Officer Michael Borrelli stopped a motor vehicle on Route 3 East for not having a driver side mirror.  While conducting the motor vehicle stop, the officer detecting the odor of marijuana emanating from the passenger compartment of the vehicle and observed the passenger with suspected marijuana protruding out of his front pants pocket.

The driver, Malena Kennerly and sole passenger, Jeffrey Reynolds both exited the vehicle, while a search of the passenger compartment was undertaken, pursuant to existing state law.  Police Officer Borrelli located some suspected marijuana, drug paraphernalia, a machete and large knife within the vehicle.

Additionally, he located a High Point 9mm Semi-Automatic handgun in Ms. Kennerly’s purse that was loaded with hollow point ammunition.  While placing the duo under arrest with the assistance of Police Officer Justin Pardo, Jeffrey Reynolds was found in possession of a loaded Glock 36 .45 caliber handgun that was stolen from Ohio.

“I applaud and fully support my officers proactive police efforts in keeping the Secaucus community safe,” Chief Dennis Miller said.  “I am especially proud that these two armed individuals were taken into custody for their crimes by the officers without resorting to any use of force.”