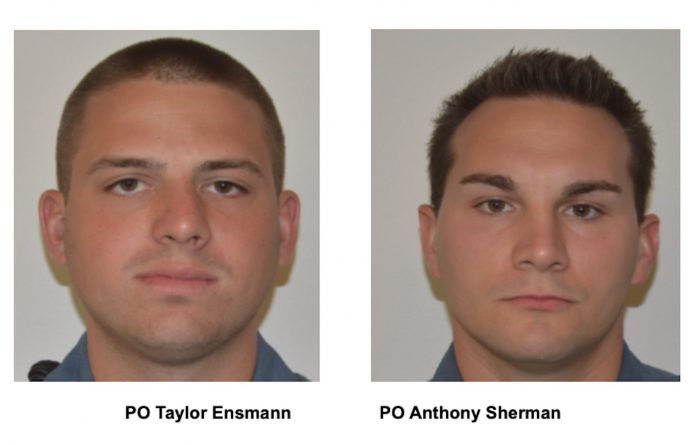 On August 20, 2020 at approximately 9:00 A.M., the Secaucus Police Department received multiple 9-1-1 calls that a male got out of a moving vehicle and was contemplating suicide by jumping off the Route 3 East Bridge that runs over of the Hackensack River.

Upon the arrival of Secaucus Police Officer Taylor Ensmann, he discovered a 22-year-old male from East Orange sitting on the ledge of the Route 3 East Bridge with his legs dangling over the marsh area below. A jump or fall into the marsh below could have, with relative certainty, been catastrophic for the victim. Police Officer Ensmann, who is also in charge of the Secaucus Police Department’s Therapy Dog Program, engaged the male in conversation and calmed him down.

After calming the distraught male, Police Officer Ensmann and Police Anthony Sherman, who was now on scene, got close enough to this male to grab him around the torso and arms and remove him from the bridge’s ledge, thereby preventing this suicide attempt.  The male was later transported to Hoboken University Medical Center for evaluation. It became apparent that the male suffers from extreme depression, but Police Officer Ensmann and K-9 “Oakley,” who was not on scene, will follow up with this male at a later date.

“I commend the actions of my officers, who demonstrated extreme compassion while preventing someone from needlessly taking their own life.”  Chief Dennis Miller said. Chief Miller reminds all members of the public that there are suicide hotlines and plenty of entities that help in dealing with depression and suicidal tendencies.  Chief Miller further states that if any member of the public is feeling suicidal to please don’t hesitate and call 9-1-1 immediately.