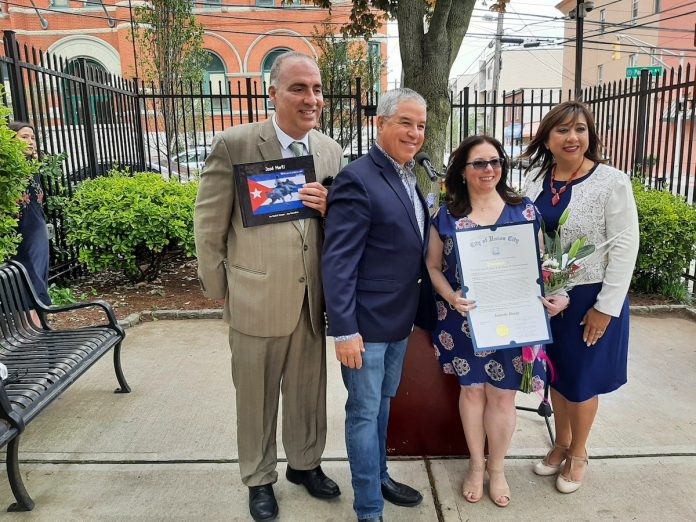 As the Island nation of Cuba continues to suffer after more than 60 years of Communist, dictatorial rule, the City of Union City, home to the second largest contingent of Cuban-Americans outside of Miami, today celebrated the country’s 1902 independence, which lasted until 1959 when Fidel Castro’s Communist Party takeover and Revolution was in full force.

Today’s ceremony at International Plaza across from City Hall featured the raising of the Cuban flag.  In addition, Jeanette Doody, a fourth and fifth grade, bilingual support teacher at the Colin Powell School received a city proclamation as Cuban American of the Year.

Two, New Jersey Senate Citations from Senator Brian Stack, who was unable to attend the ceremony, were presented to former Cuban political prisoner Ino Martel Casuso and Jay Gonzalez, who has long been involved with city cultural events.

After the Spanish–American War, Spain and the United States signed the Treaty of Paris (1898), by which Spain ceded Puerto Rico, the Philippines, and Guam to the United States for the sum of $20 million and Cuba became a protectorate of the United States. Cuba gained formal independence from the U.S. on May 20, 1902, as the Republic of Cuba with the swearing in of its first elected president, Tomas Estrada (aka Estrada Palma — with his maternal patronymic added as per Hispanic cultural tradition). Under Cuba’s new constitution, the U.S. retained the right to intervene in Cuban affairs and to supervise its finances and foreign relations. Under the Platt Amendment, the U.S. leased the Guantánamo Bay Naval Base from Cuba.

Weather permitting, this evening at 7 o’clock, there will be a concert at Celia Cruz Park on Bergenline Avenue at 31st Street celebrating Cuban Independence.  An exhibit Jose Marti paintings will also be on display at 7 pm at the William Musto Cultural Center.  Borh events are free to the public.