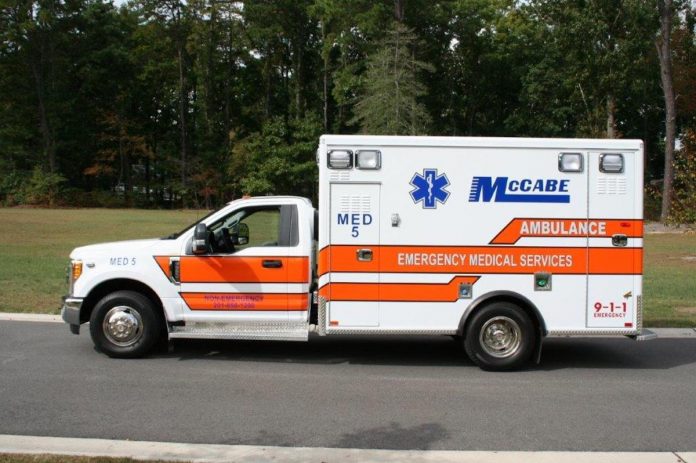 In a perfect example of Governor Phil Murphy’s favorite phrase, “don’t be a knucklehead,” Bayonne Police have arrested a 51-year old, New York City man for refusing to wear a face mask while inside a McCabe Ambulance.

Captain Eric Amato reports that the incident happened on Tuesday morning at 10:39, when James Watson was taken into custody near the intersection of 21st Street and Avenue E.

Bayonne Police were flagged down by EMS personnel from McCabe Ambulance, who told them their patient had become unruly and refused orders to leave the vehicle after he would not don a mask.  The patient, Watson, became increasingly irate as police approached him.  Watson grabbed an item from the ambulance’s wall and threw it at the police officers, also spitting inside the vehicle.

Police tried to subdue Watson, but he fought back, trying to bite each officer.  He did make contact with one officer, breaking the flesh.  Additional officers arrived, but Watson continued to resist, forcing police to administer pepper spray.

When officers attempted to handcuff Watson, he tightened up according to Captain Amato, laying on his hands.  Watson eventually was handcuffed by police and taken to the hospital for treatment.  The officer who was bitten was also treated at the hospital.

Watson was issued a summons for aggravated assault and resisting arrest.

As mentioned, as we all suffer through this unprecedented coronavirus world, don’t be a knucklehead.

Next week, the City of Hoboken will begin the installation of new, state-of-the-art parking technology in municipal parking garages. The new system, will create easier access to garages for all customers, improve account management for monthly users, and assist residents and visitors with live, real...
View on Facebook
·Share

How about something to stop people from making the illegal left into the Walmart from Tonelle Ave. This holds up traffic up to the Chuck e cheese during rush hour unnecessarily, all just because people cant drive the Other 100 ft. to the legal turning lane. All it will take is a few simple plastic keep in lane sticks idk what their called like the ones in the tunnels. 🤔