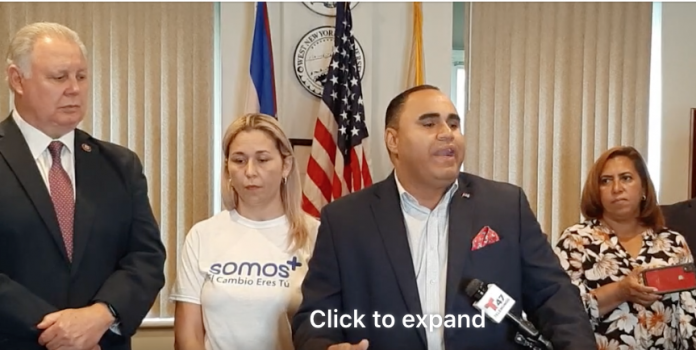 This afternoon West New York Mayor Gabriel Rodríguez, along with Congressman Albio Sires, elected officials, community leaders and former political prisoners of Cuban origin held a press conference at West New York’s Town Hal  to react to what has been cataloged as the largest demonstration in the history of the island against the communist regime of Miguel Díaz-Canel.  The peacefully organized demonstrations occurred on Sunday, as hundreds Cubans in numerous island cities cried out for freedom and democracy.

“As the son of Cubans and as Mayor of the second largest Cuban community after Miami, we unite in a voice of solidarity with the Cuban people who after 60 years of dictatorship and repression say enough to the economic crisis in Cuba, the lack of vaccines against the coronavirus, medicines and essential items in hospitals in the midst of this pandemic and the continuous violation of human rights,” said Mayor Rodríguez. “We cannot stand idly by in the face of tyranny and where people are seeking the freedom to live decently under democracy, as we live here in our country.”

The Cuban-American community in West New York along with municipal, state and federal elected officials as well as former political inmates and community leaders will join in the thousands of Cubans on the island demanding the end of the communist regime that has oppressed the island for more than six decades, demanding freedom.

Tomorrow evening at 6 o’clock there will be a march along Bergenline Avenue, beginning at 79th Street, with numerous Hudson County Mayors and other elected officials demanding an end to the 60 year, communist regime on the island.