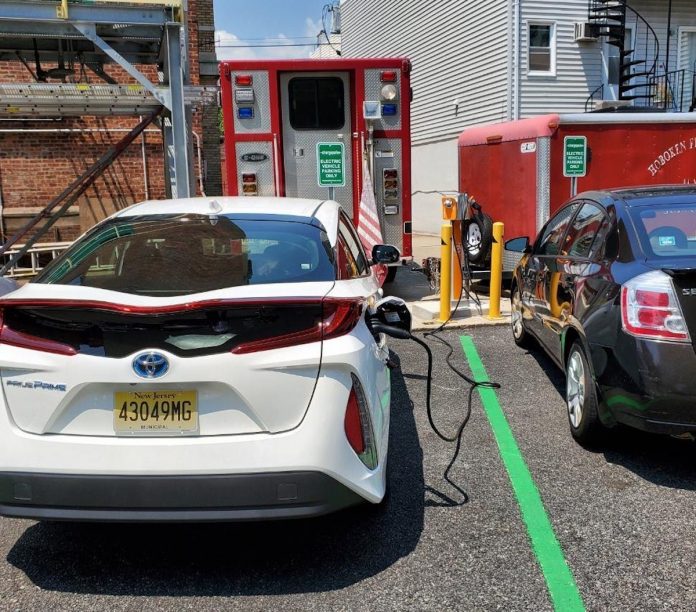 Mayor Bhalla also announced the introduction of two new plug-in hybrid electric vehicles (PHEV) to the City’s municipal fleet. The City is phasing in a total of eight fuel efficient vehicles by the winter of 2021, including three hybrids and five plug-in hybrid electric vehicles. These new vehicles are the first phase of a comprehensive fleet management program which is projected to save taxpayers over $870,000 over the next 10 years, with average maintenance costs expected to be reduced by $128 per month. The program reduces the carbon footprint of the City’s fleet by increasing the average miles per gallon (MPG) of fleet vehicles from 14 MPG to 30 MPG by 2025.

“Our new electric vehicle charging stations and new energy efficient vehicles are the latest way Hoboken is creating a more sustainable city and achieving the goals of our Climate Action Plan,” said Mayor Bhalla. “For those who need a vehicle in Hoboken, we want to make it easier to own an electric vehicle which will contribute to an overall reduction in our collective greenhouse gas emissions. I thank Governor Phil Murphy and the State DEP for providing grant funding to help make this project possible.”

The new charging stations and addition of energy efficient vehicles to the City’s fleet are components of Hoboken’s comprehensive Climate Action Plan, announced by Mayor Bhalla on Earth Day in 2019. The Plan seeks to exceed the goals of the Paris Agreement and become carbon neutral by 2050, with municipal operations carbon neutral by 2035.

The City is now preparing to expand the number of public EV charging stations within the next six months to include Midtown Garage (371 4th Street) and Lot 3/North Lot (1301 Jefferson Street). Other locations through the city will be considered as well.

For more information about the charging stations, including their specific locations within Garage B and Garage D, currently availability, payment setup, and more, please download the Chargepoint mobile app in the Apple App Store or Google Play Store or visit https://na.chargepoint.com/charge_point.