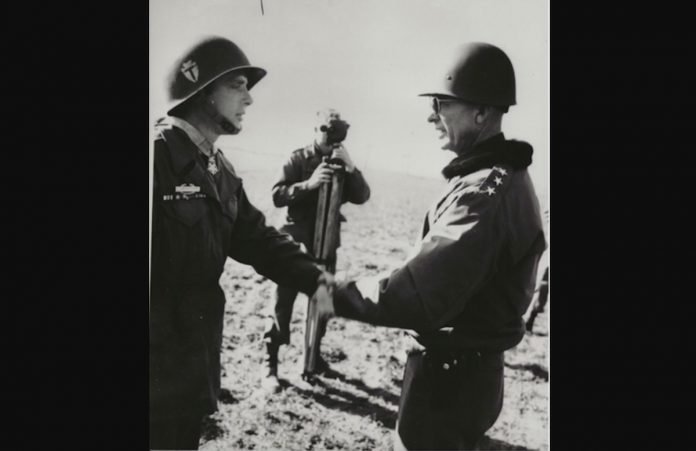 Hudson County Executive Tom DeGise unveiled a statue of Stephen R. Gregg, the World War II Hero and Congressional Medal of Honor winner from Bayonne in a ceremony in the county park that bears the hero’s name this morning.  The statue stands near the 43rd Street entrance to Stephen R. Gregg Park just off of John F. Kennedy Boulevard in Bayonne.

County Commissioner Kenneth Kopacz of Bayonne, and members of the Gregg family, including Gregg’s son Stephen Jr., and daughter Susan, joined the County Executive to do the unveiling.

Born in 1914, Stephen R. Gregg was a welder who lived on Hobart Street in Bayonne before the war. He volunteered for the army after the bombing of Pearl Harbor.  His job as a welder could have kept him out of the draft. On August 27, 1944, Gregg saved seven wounded soldiers while his unit was advancing up a hill near Montélimar in southern France, when enemy gunfire pinned them down. The men were hit, and the fierce gunfire prevented medics from reaching them.

Sgt. Gregg picked up a discarded light machine gun and charged up the hill with a medic in tow. Even as German soldiers tossed grenades at him, Gregg continued to fire at them, allowing the medic to rescue the wounded men. After running out of ammunition, Gregg found himself surrounded and nearly captured, but was able to escape when fellow U.S. troops who had been able to re-position themselves during his charge fired on the position, sending the Germans scrambling.

Along with the Medal of Honor, the highest honor a soldier can receive, Gregg was also awarded a Silver Star, a Bronze Star with cluster, a purple heart with cluster, the French Croix de Guerre, and the Combat Infantry Badge. On Bastille Day in 2001, France honored him with its highest medal, The Legion of Honor. He was one of the highest decorated soldiers of World War II.

Prior to his heroic action in France, Gregg was wounded twice. Once near Oran, Algeria in late 1943, during the U.S. North Africa campaign and then again while in action in Italy in January 1944, where he won his Silver Star.

He returned home to Bayonne in May, 1945 holding the rank of Lieutenant, unerringly humble about his heroics at a host of ceremonies over the next five decades. He settled back into life in Hudson County as husband, father and member of the Sheriff’s Department. He passed away in 2005.

“Stephen Gregg’s bravery was only exceeded by his modesty,” said County Executive DeGise. “Whenever I encountered him, I was always struck by how he deflected praise of his incredible service in some of the fiercest campaigns in the European Theater during World War II—where he shed blood for our nation more than once—and continued to fight. I am so glad our Public Art Trust has funded this wonderful work honoring a Hudson County resident and a great American.”

“Stephen Gregg was a son of Bayonne willing to do his duty but then go far beyond the call of duty when the circumstances demanded it,” said Bayonne County Commissioner Kenneth Kopacz, who sponsored the resolution to build the statue. “His example remains one for all of us to draw on. Stephen Gregg battled when the odds seem hopeless; fought relentlessly; and then carried the day. This statue ensures that his story is always there to inspire us and future generations yet to come.”

The statue is seven feet tall and sits atop a three foot-high granite pedestal surrounded by plantings set in a semi-circular viewing space that has also been upgraded with new decorative lighting and pillars. An existing plaque honoring Gregg will be incorporated in to the statue’s pedestal.

The $130,00 project cost was funded by the County’s “One Percent for Art” Trust Fund that sets aside one percent of all County capital project costs for the creation of professionally created public art work installations near county buildings and in county parks and recreational spaces.

A fair and open contracting process that included a review of proposals by the Office of Cultural and Heritage Affairs through its public art committee culminated in a signed contract on January 4, 2020 with J. Brett Grill, of JBG Sculpture of Grand Rapids, Michigan.

Grill expressed excitement at the prospect of the unveiling and about the impact he hoped the statue would have on the community.

“It’s exciting that we’re finally able to share our lives a bit now,” said Grill. “We will be able to come together share the story of Stephen Gregg and celebrate his life with a statue. Hopefully, it will offer us an opportunity to focus on a life lived selflessly and the ties that continue to bind us together.”

Grill’s past work can be found on his website: https://www.jbgsculpture.net/.