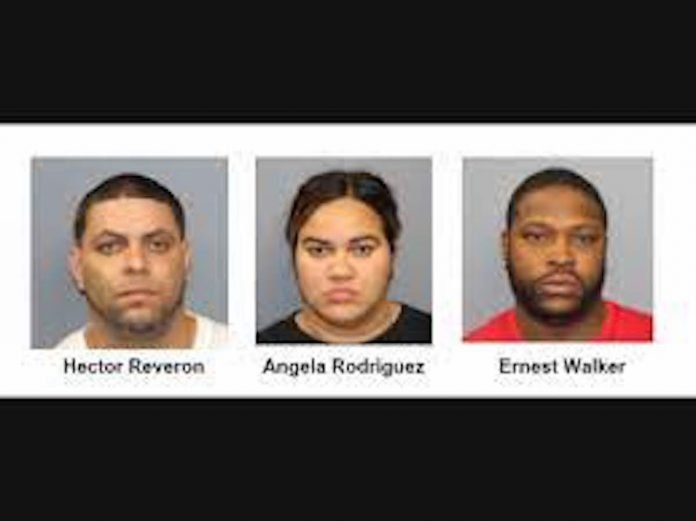 On July 29, 2020, the Secaucus Police Department arrested Hector Reveron subsequent to a motor vehicle stop on Secaucus Road.  During the stop he was placed under arrest for an active warrant from North Bergen with a bail of $350.00.  At the time of his arrest, Hector Reveron was found in possession of thirty-four (34) bags of suspected crack/cocaine and three (3) folds of suspected heroin.  He was charged with multiple crimes and lodged in the Hudson County Jail, but released a short time thereafter.

In May of 2021, the Secaucus Police Anti-Crime Unit developed information that Hector Reveron, a Secaucus resident, was supplying a variety of drugs to Hoboken residents.  As a result of this information, the Secaucus Police Anti-Crime Unit and the Hoboken Police Department’s Street Crimes Unit collaboratively conducted a narcotics investigation.   During the investigation, two individuals were arrested in Hoboken by members of the Secaucus and Hoboken Police Departments after they were observed purchasing suspected heroin from Hector Reveron.

At the culmination of a two-month long investigation, Hector Reveron was arrested by members of the Secaucus and Hoboken Police Departments on July 15, 2021 at his Riverside Station Boulevard Apartment.  Thereafter, a search of his apartment was conducted.  During a search of the apartment $9,423.00 in cash was seized, which is believed to be derived from criminal activity.

Additionally, a search of an apartment Hector Reveron is associated with on the 300 block of Harrison Street in Hoboken was also conducted.  Ernest Walker and Angela Rodriguez were found within the Harrison Street Apartment and were arrested after the search.  During a search of the Harrison Street apartment, more than one and a half ounces of suspected cocaine and crack/cocaine, a quantity of suspected heroin, along with materials used to package narcotics for street sale were seized along with $362 in cash.

“The Secaucus Police Department will continue to work collaboratively with other law enforcement agencies to pursue and apprehend criminals across jurisdictional boundaries that have a nexus to Secaucus.  The ongoing partnership between the Hoboken and Secaucus Police Departments will help ensure a better quality of life for the residents in both Secaucus and Hoboken. I would also like to thank the professionalism of the Hudson County Regional SWAT and Hudson County Sheriff’s Office SWAT for their assistance in making entry into the apartments in Secaucus and Hoboken,” Secaucus Police Chief Dennis Miller said.

“The collaboration, planning and execution of this operation was exemplary.  I want to personally thank Chief Dennis Miller for his continued leadership and assistance to both our agency and community.  I want to also express my sincere gratitude and appreciation for the efforts of the Hoboken Police Department investigations bureau led by Captain Gino Jacobelli, Hoboken Police Street Crimes Unit, Hoboken Emergency Services Unit, the Secaucus Police Department, Hudson County Regional SWAT and other law enforcement partners.

Investigations of this magnitude can be time consuming and complex.  To the residents of the Hoboken Housing Authority, I thank you for your continued patience, community support, collaboration and communication.  We at the Hoboken Police Department understand that this a partnership that we wish to continue to build.   Additionally, I urge all residents to report any and all criminal activity by calling our department at 201-420-2100.  I along with my team look forward to meeting with local leaders and community partners to help assist in any way possible,” Hoboken Police Chief Daniel Lobue said.

Tips can be made by calling (201)330-2049, emailed to spdtips@secaucus.net or submitted anonymously through the department’s website at www.secaucuspolice.org.