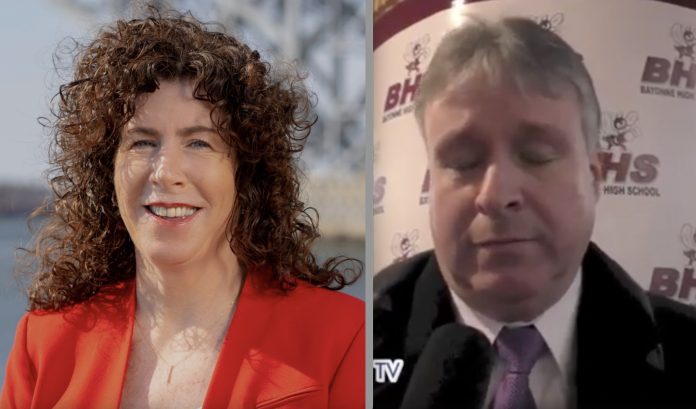 But hold on folks.  Ashe-Nadrowski believes Davis may not have received the required 50-percent plus one vote to declare victory, as he did at the Chandelier last night.  In a statement from Ashe-Nadrowski around 10 pm last night, she stated, “The election remains too close to call. It’s important that we make sure everyone’s vote was and is counted. I had hoped for a higher turnout, but considering the negative campaign it doesn’t surprise me that some people stayed home or were too intimidated to actually cast their ballots. We’re looking forward to reviewing the remaining vote by mail and provisional ballots. Given the data we have collected, we think round two will take place on June 14th.”

So, will there be a runoff election on June 14th or not?  We will have to wait and see as provisional and absentee ballots are tabulated.  None the less, Mayor Davis declared victory, telling his supporters, “The people of Bayonne have spoken loud and clear that they want to keep our city moving forward for another four years with Team Davis.”

According to the unofficial results released last night by Hudson County Clerk Junior Maldonado, Davis received 4,863 votes, while Ashe-Nadrowski tallied 4,084.  Dr. Mitchell Brown was a distant third with 611 votes.  That’s 50.81 percent for Davis.  You can see why Ashe-Nadrowski is not convinced of a Davis victory just yet and is anticipating a runoff on June 14th.

Meanwhile, there’s drama with the At-Large Council race, where one of six candidates needed to receive 25-percent plus one vote.  According to the Clerk’s Office, Davis newcomer Loyad Booker, who would become the city’s first-ever African American Councilperson if the numbers hold up, tallied 4,127 votes, or 25.08 percent.  Talk about narrowly avoiding a potential runoff.

This allowed incumbent Team Davis Councilman Juan Perez, who barely outpaced Ashe-Nadrowski candidate Jodi Casais, 3,414 to 3,283, to avoid a runoff.  That’s 20.74 percent to 19.95 percent.  The Hudson County Clerk will have to factor in provisional and absentee ballots to determine if these tallies indeed avoid a runoff election.

So despite Mayor Davis’ proclamation of a clean sweep last night, this morning, technically, we do not officially know.

THe Ashe-Nadrowski campaign is keeping its fingers crossed.