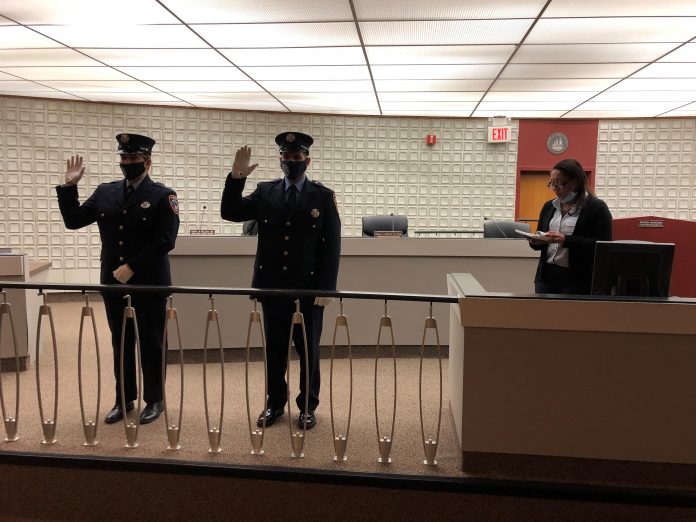 At a ceremony in the City Council Chambers on Wednesday, December 16, the Bayonne Fire Department promoted Firefighters Cailin Brodel and Raccys Pozo to the rank of Captain.  Captain Brodel is the first female to hold that rank in the Department’s history, while Captain Pozo is the first Cuban-American to have that position.

Speaking at the ceremony, Fire Chief Keith Weaver said it was “an historic day in the Fire Department.”  Chief Weaver explained that the promotions were “based on merit,” coming from competitive Civil Service tests.  He said that captains normally have eight to ten years of service when they assume that rank. By comparison, Captains Brodel and Pozo achieved the rank with six and seven years, respectively, in the Fire Department.  Chief Weaver added that the Fire Department was making history in a second way this week.  For the first time ever, there are two females in the newest crop of firefighters.

Mayor Jimmy Davis congratulated both new captains, saying, “All of us are proud.”  He said that the Fire Department “is in great hands.”

Speaking on behalf of the City Council, Council President Sharon Ashe-Nadrowski described the new captains as “great firefighters.”  She said that they would not rest on their past accomplishments, and would move onto “more challenges” in the years ahead.

Addressing the new captains, Deputy Chief William Bartos said, “You have excelled.” He said that Captains Brodel and Pozo “are in the right job at the right time.”

Captain Pozo was appointed to the Bayonne Fire Department on April 8, 2013.  He has been assigned to Engine Company #3 for his entire career. Captain Pozo and his wife CoriAnn are the parents of three children.  He is a graduate of the St. Barnabas School of Radiation Therapy.