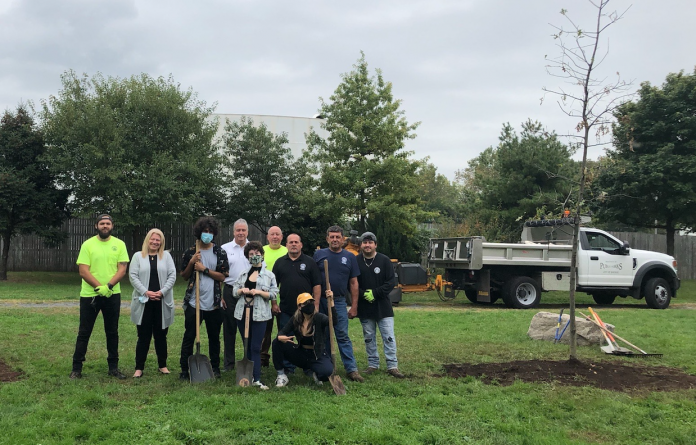 Mayor Jimmy Davis advised residents that the City of Bayonne supports trees through its programs for public works, parks, and planning.  Mayor Davis said, “Bayonne has been a Tree City USA for twenty-five years, as designated by the Arbor Day National Foundation.  Through our municipal programs, we encourage the planting of trees throughout the community.”

During 2021, the Bayonne Department of Public Works and Parks has planted 21 trees and ordered an additional 12 trees, for a total of 33.  Of the 33 trees, two have been planted in parks, and two will be placed in parks, while the rest have gone or will be going to residential areas.

Six of the 33 trees were donated by NB Earth Talks, an environmental and conservation organization based in North Bergen.  NB Earth Talks coordinated the donation of trees to the City of Bayonne with the Department of Public Works and Parks.  Two of the trees from NB Earth Talks were planted in Halecky-IMTT Park on Bayonne’s East Side.  The other four trees from NB Earth Talks have been planted as follows: one on West 21st Street, one on Avenue A, another by the public library at 31st Street and Avenue C, and the last one by the 4th Street Senior Center.

When the City of Bayonne renovates parks, trees are a major part of the plans.  At Francis G. Fitzpatrick Park, which located on Avenue C between 26th and 27th Streets, at least approximately 20 trees will be planted.  That park is being renovated at the same time that a new stormwater piping system is being installed below it.

At Dennis P. Collins Park, which is located at 1st Street, both park renovations and an environmental clean-up have been taking place.  Since environmentally damaged soil had to be removed, many trees in Collins Park had to be taken down along with it.  According to City Engineer Rob Russo, 105 new trees will be planted in Collins Park.

Bayonne has a tree protection ordinance, which was introduced in 1999 by former Council Member At-Large Mary Jane Desmond.  The goal of the ordinance is to maintain at least the existing number of trees located between the fronts of properties and the curbs.  Under the terms of the ordinance, if a tree is taken down in a public right of way, the owner must either plant a new tree or pay $250 into the municipal tree fund.  That fund is used to purchase new trees for parks and other locations, so that the number of trees in Bayonne will not decline.

For information about Bayonne’s tree-planting program, please call the Department of Public Works and Parks at 201-858-6131.