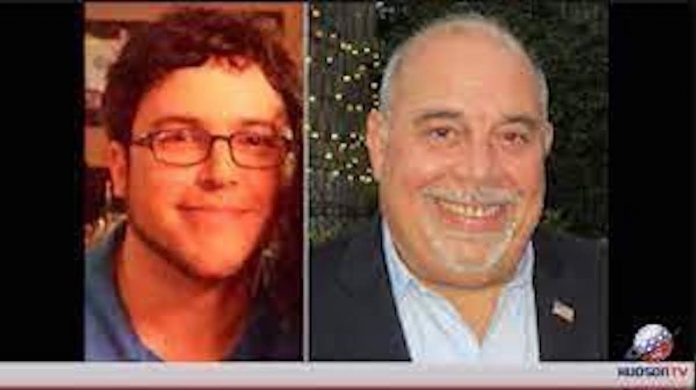 On a sweltering hot and humid Tuesday night, the Hudson County Republican Party and its committee members gathered inside The Boulevard in North Bergen to reorganize and vote for a Chairman.  It was expected that Chairman Jose Arango, a former State Assemblyman and current Chair of Chairs of New Jersey’s County Republican organizations, would face opposition for the Hudson GOP Chairmanship from Hoboken resident, and former New Jersey State Republican Committeeman Joshua Sotomayor Einstein.

That face-off never actually took place.  In fact, the media was barred from being inside the reorganization meeting altogether, as was Sotomayor Einstein himself because he was no longer an elected committeeman from his Hoboken district, having lost a race recently to retain his seat.

Hudson TV was told Jose Arango would make himself available to the media once the meeting concluded.  He never did.  In fact, North Bergen Police escorted the media off of The Boulevard property and Hudson TV was interrupted while doing a Facebook Live with Sotomayor Einstein.  At 6 pm tonight, the door was locked to the meeting.  Even if committee members showed up several minutes past 6 pm, they were barred from entering and ultimately voting.

Hudson TV did get ahold of Arango, and he texted us the following statement:  “I just want to thank the overwhelming support of the Republican Party in Hudson County. 120 to 2 tells you the entire story.  I also want to thank the 20 Republican Party Chairmen in NJ for supporting me as their Chairman of the Chairs.  That’s the answer to the person (Sotomayor Einstein) who created all the problems, lost as Committeeman.  They basically ask him not to be a Republican State Committeeman because of his behavior that is well known and ask everyone to support Jack Ciattarelli for guv and the entire Republican Party ticket in Hudson County.”

Arango continued, “The real deal if he was so effective after all his years , he will have more than 2 votes for Chairman.  He will not lose as a Committee person and lost Hoboken Republican Party to Joe Branco.  Now for the next 4 years it is going to be inclusion, growth, love and stop the hatred behavior of this poor soul.  I’m praying for him that he gets to an understanding how the world functions and how the Hudson County and NJ hard working are all about.  Thanks to the real media outlets.  Was a Republican Party reorg meeting, not a circus for a want to be media outlet.”