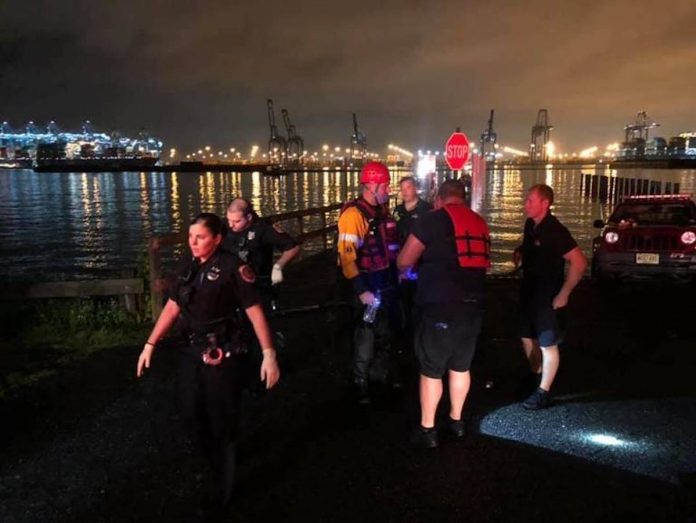 Members of the Bayonne Fire Department rescued a woman from the waters of Newark Bay last night near Don Ahern Stadium.  According to Bayonne Deputy Fire Chief Bill Bartos, the woman attempted to evade her rescuers, but she was eventually pulled to safety.

The incident began at 8:47 p.m. in a heavy rainstorm.  According to Deputy Chief Bartos, “In the midst of a torrential downpour, arriving Police and Fire units spotted a woman approximately 200-300 yards off-shore.  BFD launched two marine units and were able to make contact within minutes.  The woman refused to be rescued and continued to evade rescuers.”

It was at this point Bartos says two fire department rescue swimmers entered the water, but the woman continued to be combative, refusing to allow the firefighters to secure her.

According to the Deputy Chief, “At approximately 10 p.m., Bayonne Fire personnel were able to safely pull her aboard their vessel.”  The victim was transported to the Bayonne boat dock at 16th Street.  McCabe Ambulance then took her to a local hospital.

The identity of the woman has not been revealed.  Deputy Chief Bartos added, “Tonight’s rescue was an incredible display of bravery and professionalism from our firefighters.  They exhibited great skill under challenging conditions and were able to bring this emergency to a successful end.”