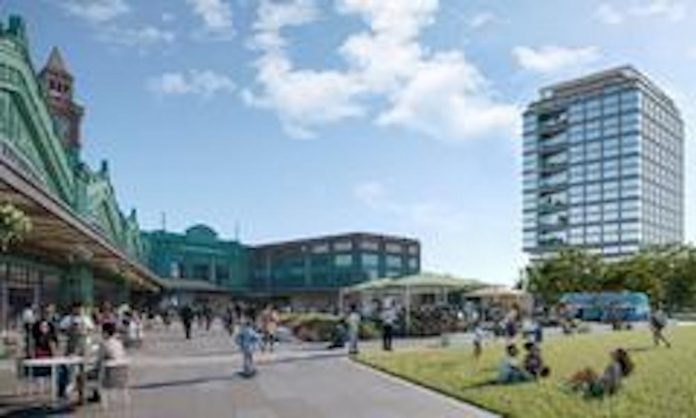 Hoboken has approved a Redevelopment Agreement for new development and public infrastructure improvements near Hoboken Terminal.  Mayor Ravi Bhalla signed the agreement, approved 8-0 by the Hoboken City Council, with LCOR Hoboken Rail Station Redevelopment LLC for the transformational project, Hoboken Connect, which will realize long sought-after new office space, retail, and affordable housing as well as significant improvements to the surrounding streetscape. The project, which had stalled for 15 years, was jump started through cooperation between NJ TRANSIT, LCOR, Hoboken, and the State.

The project is a multi-phased initiative that will consist of private and public components implemented in coordination over the coming years. Public investments will include construction of a new bus terminal on Hudson Place, significant rehabilitation of the exterior and the first and second floors of the Ferry Terminal for commercial and exhibition space, the redevelopment of Warrington Plaza, and improvements to Hudson Place to support bicycle and pedestrian access to the transportation facilities. Governor Murphy has committed $176 million in the FY23 state budget for the public improvement phase. The private phase includes a mixed-use residential building with 20 percent dedicated as affordable housing; a 20-story Class A office building with a rooftop terrace, 5,000 sq. feet of retail space and related public open space investments, including additional pedestrian, vehicular and bicycle improvements.

All improvements will be made utilizing historic preservation guidelines where applicable. 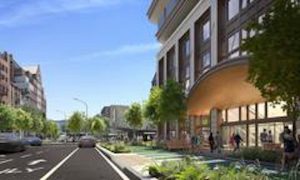 “The Governor and I are proud of this redevelopment in Hoboken and the economic benefits it brings,” said Acting Governor Sheila Oliver. “The Murphy Administration is focused on strengthening our state from the inside out. We look forward to all the benefits the redevelopment project will bring to the Hoboken community and to the region.”

“The State’s multi-million-dollar investment into our community will be transformational at this historic gateway into our City’s downtown,” said Mayor Ravi Bhalla.  “Through the private phase of this crucial project, the City will also be able to increase its affordable housing stock with a landmark 20 percent set aside through the construction of new residential units. Thank you to Governor Phil Murphy and Senator Brian Stack, as well as Assemblywoman Annette Chaparro and Assemblyman Raj Mukherji for their commitment to this project.”

“We are grateful for Governor Murphy’s substantial financial commitment for these improvements to the rail, bus and ferry facilities at Hoboken Terminal. This will greatly benefit the millions of NJ TRANSIT, PATH and NY Waterway customers who rely on this vital, intermodal transportation hub every year,” said NJ TRANSIT President & CEO Kevin  Corbett.  “We look forward to continuing our partnership with Hoboken and LCOR to bring this project to life and restoring Hoboken Terminal to be the crown jewel of our transit system.”

“As Hoboken continues to be a destination for people all across New Jersey, our region, and beyond, I am thrilled that money from the state budget will be used to revitalize the downtown area near our beautiful and historic Terminal,” said Assemblywoman Annette Chaparro (D-33).  “This project will be a benefit not only for those who visit, but it will also enhance the quality of life for Hoboken residents who will realize improvements and expansions to recreational spaces, our crucial transportation system, as well as new retail and housing opportunities.”

“The redevelopment of the transit hub will be a big win for the residents of Hoboken, and a big win for the residents of New Jersey,” said Council President Michael Russo. “I’m proud to have supported this plan, and even more proud to have been able to finalize it in my tenure as Council President. This project will yield a tremendous addition to our affordable housing stock, while investing in substantial improvements to our public spaces and providing local residents with excellent job opportunities. Congratulations to all of the stakeholders for coming together to finally move this revitalization project forward.”

“It is exciting to see this project move forward after so many years of discussion, and to be a part of the next stage of the design process,” said Council Vice President Emily Jabbour. “I am particularly excited to see the design for the spaces for public use – especially Warrington Plaza – as we transform this gateway into Hoboken into a more welcoming and active area. Thank you to Governor Murphy and his Administration for their support of this significant project.”

“I ran for office to bring a creative vision for Hoboken’s future. Central to this promise was the historic renovation of the Lackawanna Terminal into a European-style market and Warrington Plaza into a publicly accessible waterfront plaza,” said First Ward Councilman Mike DeFusco. “What was once a distant idea is finally becoming a reality. I want to thank Mayor Bhalla for collaborating with me on this project and trusting that it was a project worth fighting for. Once complete, the terminal district will not only proudly welcome folks to the First Ward, but certainly be a regional destination where we can live, work, and play.”

When complete, the project will directly and indirectly support 15,290 permanent jobs and $234 million in tax revenue annually. The City of Hoboken will see thousands of jobs on site with millions generated in annual retail spending, and additional annual revenue, while NJ TRANSIT will benefit from substantial ground lease payments, increased ridership and customer experience improvements. More than 9,800 construction jobs will be created.