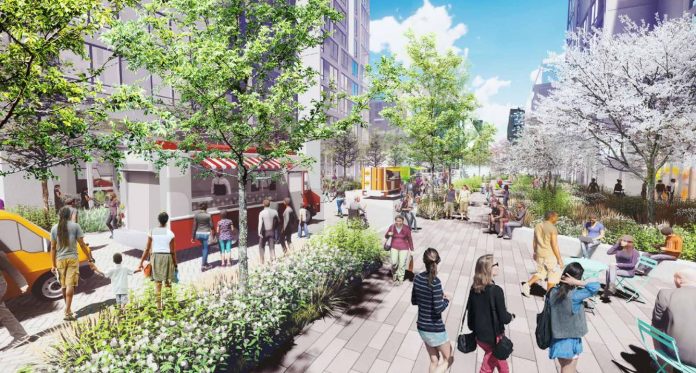 The North End Redevelopment Plan was originally introduced to the Hoboken City Council for consideration on January 27, 2021. After input from residents, the plan was amended to include a protected bike lane on 15th Street, a requirement for the linear park in the plan to be open 24 hours a day without barriers to access, incorporation of Vision Zero improvements on Park and Willow Avenues within the North End, greater pedestrian connectivity between Hoboken and Weehawken and a requirement that utilities be built underground.

In addition, the plan includes a proposal for a new Hudson-Bergen Light Rail station at 15th Street, public open space to connect to a City-wide green circuit, a balanced mix of new commercial and residential uses, affordable housing, pedestrian-oriented retail corridor along 15th Street, and the raising of streets to accommodate underground flood infrastructure.

Following the Council’s adoption last night, Mayor Ravi Bhalla stated, “I’m pleased that the revitalization of Hoboken’s industrial North End took a major step forward thanks to the adoption of the redevelopment plan last night.  My administration is committed to preserving the right balance of residential and commercial development that maintains the charm and character of our City, while also prioritizing critical community benefits such as a new light rail station at 15th Street, public open space, building on our city-wide green circuit, greater affordable housing options, and more. I thank the City Council for their support and look forward to moving this plan forward with the continued input of the public.”

The Plan directly impacts 30 acres presently zoned for industrial use in the 5th Ward, the Ward represented by Councilman Phil Cohen, who issued this statement after the vote: “The North End Redevelopment Plan represents an important step forward in the transformation of Hoboken’s industrial northwest into a holistic part of our present-day community. This well-conceived plan for a resilient neighborhood will integrate 30 acres of our City into the 5th Ward in a way that reflects and serves our special, vibrant community — a place for families, commerce, the arts, and parks. I look forward to moving forward on this Plan with the continued guidance of my neighbors and constituents in Northwest Hoboken.”

Council Vice President and 6th Ward Councilwoman Jen Giattino stated after the Redevelopment Plan was amended, “The City Council is proud to play a key role in moving the North End Redevelopment Plan forward, and this final product reflects several years of hard work and collaboration with the community.  I look forward to a North End that includes new businesses, commercial corridors, without overdevelopment that would threaten the charm and character of our City. Thank you to my current and past Council colleagues for their input into this well-developed plan.”

The full, amended North End Redevelopment Plan adopted by the City Council can be found on the project website by clicking here.

When contacted by Hudson TV to ask why he abstained on last night’s vote, Councilman DeFusco stated in an email, “My vision for the North End has remained consistent over the past three years — we need a plan that is more than just cookie cutter luxury condos, one that embraces new spaces, like coffee roasters, micro breweries, distilleries and other innovative light industrial uses. When we combine residential and retail space into one, unified plan, we’re able to effectively create a dynamic new section in our city. The problem with urban planning that prioritizes multimillion dollar housing and car parking is that it tends to create giant superblocks, not the charming neighborhoods Hoboken has come to expect.

Over the past six years, I’ve fought to expand ground floor retail space in an effort to help activate our streets and bring new small businesses to Hoboken. As Chair of the Zoning and Southern Development Subcommittees, I’ve been able to do just that by pushing back against developers and urging them to include retail space in their projects. This alone has secured nearly 200,000 sq ft of retail space that will be built in the coming years and unfortunately, the North plan, as presented, is lacking in that area.

I do think this is a  good blueprint for the North End, but as many of my Council Colleagues acknowledged, there’s room for improvement. I abstained because I do believe we need to get the plan moving, but I disagree fundamentally with some of the core planning philosophies. In the coming months I will be proposing meaningful updates to this plan to ensure that innovative planning comes first.”