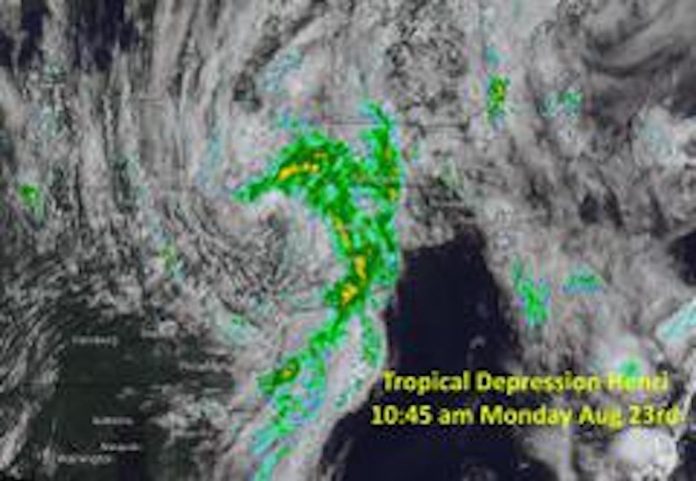 Constant rain fell on Hoboken yesterday from 8 a.m. until 10 p.m., amounting to an additional 2.43 inches of rain on top of the 4.07 inches of rain from Saturday evening for a total of 6.5 inches.

This record-high rainfall is the most rain recorded in a single storm since 2016.

The peak 15-minute rainfall intensity on Sunday was 0.76 inches per hour, while on Saturday it was 2.84 inches.

While the pump stations have been online and operational since Saturday night, and floodwaters at low-lying areas of the City are receding, the National Weather Service has extended the flood watch for our area until Tuesday, Aug. 24, at 2 a.m.

According to the National Weather Service, a widespread 2 to 4 inches of additional rainfall is possible this afternoon, and localized higher amounts will be possible through tonight.

Due to forecasted rain this afternoon, low-lying areas of Hoboken will likely flood again because the combined sewer system is currently managing the stormwater from the last 36 hours.

According to NHSA, the City’s resiliency parks are currently retaining approximately 675,000 gallons of stormwater.

Do Not Drive or Walk Through Flooded Areas

Residents, drivers, and pedestrians are urged to avoid flooded areas and stay home during the storm if possible. Flooded intersections contain rainwater and sewage.

Hoboken has a combined sewer system, where stormwater drains into the same pipes that transport sewage or humane waste and fecal matter.

When the volume of water entering the sewer system during a storm event exceeds the capacity, the excess combined sewage overflows into the Hudson River and sewers backup into low-lying city streets.

Do not drive or walk through flooded areas.

Barricades have been deployed in flood-prone intersections. Please do not drive around barricades. Do not move barricades.

Report flooded intersections and clogged drain inlets by calling the NHSA Hotline at (866) 689-3970.

The City is actively working to remove storm debris from roadways, parks, and public spaces. North Hudson Sewerage Authority is clearing catch basins reported as clogged and other performing other system maintenance.

The Department of Environmental Services is power washing areas that experienced sewer backups and removing debris from catch basins.

These activities will continue on Tuesday, Aug. 24.

Street cleaning will continue today and tomorrow as scheduled to assist in the removal of sewage from previously flooded streets.

The City’s job fair at 221 Jackson St. scheduled to occur between 4:30 p.m. and 7 p.m. has been cancelled. The job fair will be rescheduled in the near future. Applications can also be submitted online at www.hobokennj.gov/jobs.