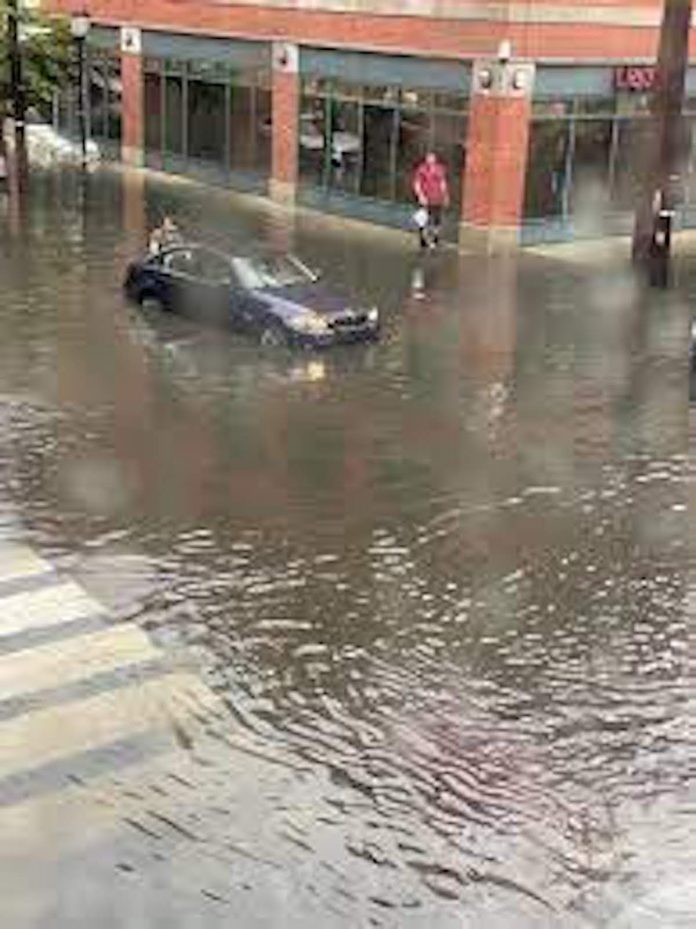 Intense Rains Bring Localized Flooding
Hoboken received a total of 1.83 inches of rain on Thursday, July 8, during two distinct rain events. The first event at 2:30 PM saw 0.14 inches of rainfall. The second event at 5:30 PMsaw 1.68 inches of rain in just over an hour. Flooding in low-lying areas occurs when the City receives intense rains of more than 0.8 inches of rain per hour. Peak 15-minute intensity was 2.92 inches per hour.  This was the fifth highest intensity storm since 2016.

Tropical Storm Elsa is currently bringing heavy rains to the City, which will likely exacerbate localized flood impacts from these earlier rain events.

Both wet weather pump stations and all resiliency parks are functioning properly and actively working to discharge water.

Do Not Drive or Walk Through Flood Waters
Flooded intersections contain rainwater and raw sewage and should not be crossed by pedestrians, cyclists or motor vehicles. Barricades have been deployed in flood prone intersectionsincluding 1st Street at Paterson Avenue and Harrison Street, 4thStreet at Jackson Street, and 9th Street between Madison and Monroe Streets, and others. Please do not drive around barricades.

Report flooded intersections and clogged drain inlets by calling the NHSA Hotline at 866.689.3970.

What to Expect Friday, 7/9
Based on current information from NOAA and the National Weather Service, residents can expect the following forecast today. Heavy rains will continue, likely resulting in rainfall totals of 2 to 4 inches, with locally higher totals possible in northeastern New Jersey.

Peak flooding from rainfall is currently expected around high tide at 9 AM. The pump stations are less effective during high tides, and most effective during low tides. Depending on the intensity and duration of rainfall during high tide periods, flooding is likely at the intersections shown on this map. Other intersections may experience flooding depending on the severity of the storm event, even during low tides, especially west of Park Avenue.

Limit Travel Friday, 7/9
Please avoid any unnecessary vehicular travel until 12:00PM on Friday, July 9. If you must travel, use mass transit.

Post-Storm Response
After Tropical Storm Elsa moves out of the area, the Department of Environmental Services, Fire Department, and North Hudson Sewerage Authority will be removing storm debris from roadways, parks, and public spaces.

Be Hoboken Ready
Please monitor local forecasts for additional advisories, watches, and warnings. Residents are encouraged to monitor the City’s Twitter (twitter.com/cityofhoboken) and Facebook (facebook.com/hoboken) or sign up to receive email or text updates by visiting www.hobokennj.gov/alerts.