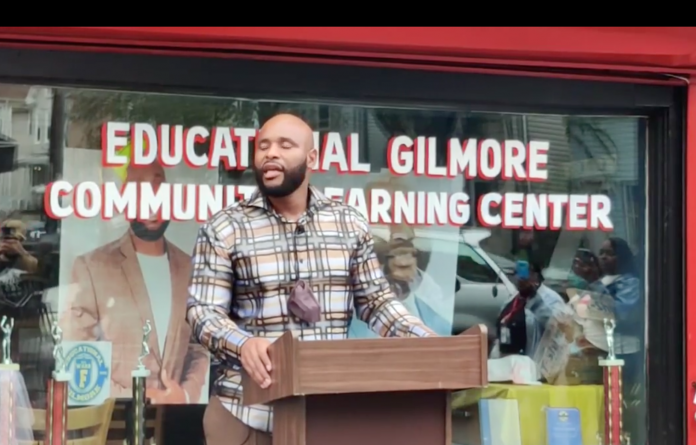 Jersey City’s Ward F Council candidate Frank “Educational” Gilmore held a press conference earlier this week outside of his community center at 135 Monticello Avenue.  Gilmore, who is challenging incumbent Councilman Jermaine Robinson, was reacting to racist attack flyers which had been placed on car windshields on Tuesday morning.  Gilmore called for the re-election campaign of Mayor Steven Fulop to denounce the flyers.  A spokesperson for the Mayor’s campaign, Phil Swibinski, says they were not involved with the flyers.

The flyers had an image of Gilmore which was intended to be a mug shot, but it was not his headshot, nor was it his campaign flyer.  The message stated “Vote No” and listed Gilmore’s previous arrests and charges, alongside claims he “destroyed Black children in Ward F.”   The flyers did not contain a paid for line as is required by law.

During his press conference, Gilmore said he has been completely transparent about his past criminal record and he called out the media to “do your due diligence” and check the record, and he also claims to not have been convicted of employing a juvenile to distribute a controlled dangerous substance.  A background check of his criminal record shows that Gilmore was charged in 2004 of employing a juvenile to sell drugs.

Gilmore says he has been transparent about his past and included it within his capaign platform.  When he was just 19-years-old, Gilmore had already spent a lot of time in juvenile detention centers.  He was arrested and sentenced to 10 years in state prison on drug charges.

The campaign for Ward F Councilman Robinson issued this statement from the incumbent:

“I am supportive of any person, especially an African American male, turning their life around, but I think Frank Gilmore is being disingenuous when he says he has been transparent about his past.
He has not talked about how he employed Black children to sell drugs for him using them as a shield for his criminal ambitions. He has not talked about his attempted murder, aggravated assault, armed robbery and the selling of drugs on school property charges.
I think it is disingenuous to feed the public a sanitized, PG rated story when the reality is that he damaged many families in this community.
In the last debate he brought up the lasting negative effect of the crack epidemic on the Black community of Jersey City as if he was not a participant in that destruction. That is not what I call transparency.
I think it is disingenuous when he tries to paint himself as a victim when his long history of being a victimizer is questioned.”
A comprehensive report on Gilmore’s background follows:
GILMORE-Comprehensive-Report-1 (1)