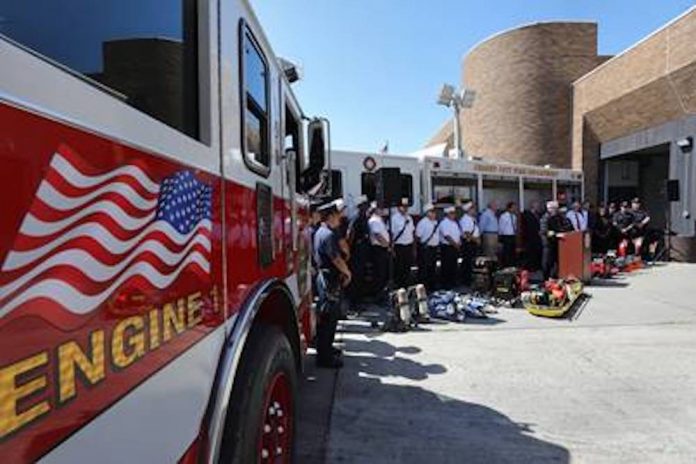 Earlier today, Jersey City Mayor Steven Fulop and members of the City’s Fire Department, announced the addition of two, new companies with specialized functions.  One company is a specialized, high-rise unit, while the other is a rapid intervention crew.  The intent is provide additional fire safety across the municipality.

According to a city press release, Mayor Steven M. Fulop was joined by Public Safety Director James Shea and Fire Chief Steven McGill today to announce two brand new fire companies and officially launch a newly created specialized response team, the JCFD High-rise Unit, to respond to all high-rise fires and all working fires as a Rapid Intervention Crew (RIC).  The last fire company added to the Jersey City Fire Department was in 1937.

“Jersey City is experiencing one of the greatest renaissances in our history, and on the city-level, we are taking the steps necessary to safeguard our growing community.  Our goal is to provide our firefighters with the best possible equipment, training, and resources they need to do their jobs safely and effectively, while providing essential fire protection to our residents and community,” said Mayor Fulop.  “We’ve worked to grow our fire department in size and strength, and these two new specialized assets we’re launching today will further boost fire safety, expanding the JCFD from 26 to 28 fire companies providing life-saving services throughout Jersey City.”

While most fire departments are maintaining or cutting companies, Jersey City is one of the only municipalities adding and expanding fire safety.  To save significant taxpayer dollars, the two new companies will each utilize refurbished apparatuses that were dismantled and rebuilt with the help of Jersey City’s Department of Public Works and repurposed to extend their service by a minimum of 10 more years.

The JCFD High-rise Unit requires specialized training and equipment specific to high-rise fire operations.  The Squad 1 unit will deploy the newest battery-operated tools rather than standard gas-powered tools, including power saws, exhaust fans, and lighting, which will increase safety in confined areas.

A secondary function for Squad 1 will be its response to all working fires as a Rapid Intervention Crew (RIC). The RIC is staffed by firefighters whose mission is to rescue the rescuers. They will be deployed to emergency scenes to rescue firefighters who are trapped or lost in a fire building and cannot safely self-evacuate.

“These new fire companies will not only significantly expand fire protection for the entire community, but by providing specialized tools and training, our firefighters will be better equipped and better protected when they go into a fire and often risk their own lives to save others,” said Director Shea.

Squad 1 is an in-house refurbished apparatus that was procured through an Urban Area Security Initiative (UASI) federal grant.  It was originally used by the JCFD as a Mass Care Response Unit for over 16 years.

Engine 1 is an in-house refurbished engine apparatus that was formerly used by Engine 9. It will respond as a fire engine company to areas covering western parts of downtown and the eastern parts of the Journal Square area.

“Both of the new companies are being placed back into full-time service after being removed over 30 years ago when the fire department’s call volume was 20% less than today’s calls for emergency response and Jersey City’s population was 25% less than the 300,000 residents who call Jersey City home today.  So, this is a big day for the Fire Department and the Jersey City community overall as we continue to make sure our citizens are as safe as possible,” concluded JCFD Chief McGill.